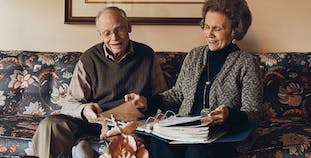 Alta Birdsong Proves That a Life With Less Pain Is Possible

This world traveler and octogenarian has had psoriasis for over 60 years and psoriatic arthritis for nearly 40. She has no plans to slow down.

Alta Birdsong, now in her mid-eighties, is living an action-packed life. She and her husband, Kenneth, have traveled around the world. (If she could snap her fingers and magically appear anywhere, she’d choose London, her favorite destination.) The couple celebrated their 60th anniversary in October 2018 on a cruise in the western Caribbean, and the only reason they didn’t venture farther from their Georgia home is because Kenneth has finally become tired of 15-hour flights.

Alta’s life has also been packed with psoriasis and psoriatic arthritis (PsA).

“You have to forge ahead,” she says. “I know. I’ve been through the pain.” She and Kenneth have lived in the Atlanta area for 48 years, but she still retains the accent from the North Texas town where she was born in 1934.

Alta (whose maiden name is Flowers) was diagnosed with psoriasis at age 20 during her senior year at the University of North Texas. “I had never heard of psoriasis, and no one in my family had the disease,” she says. The Birdsongs have two children and five grandchildren who have shown no signs of the disease either.

After graduating college, Texas Instruments (TI) hired her in 1955 as its first female cost engineer. “I had to have a physical to be included in the company’s insurance,” she says. “The physician looked at me and said I would take psoriasis to my grave. What a sad future for a 21-year-old woman beginning her career.”

In her six years at TI, Alta rose through the ranks and eventually managed nine women, despite embarrassing moments in meetings when “my scalp psoriasis was inching out onto my head and I’d sit there and hope nobody noticed.”

In the midst of those years, she met and married Kenneth and gave birth to their first baby. “Child care in that era was too expensive or not to be found,” she says, and so she left TI to focus on parenting full-time.

An Education From NPF

Alta’s psoriasis worsened in her twenties and thirties. “I continued to suffer the pain of scales as well as the humiliation that comes when people looked at me and my sores – which were everywhere,” she says. “I received little help back then from dermatologists and used over-the-counter ointments to alleviate the pain.”

In 1980, when Alta was 46, she heard about NPF and became a member. “The Foundation supplied me with so much information!” Around this time, she began to experience pain in her hands, fingers and toes. A hand surgeon wanted to perform carpal tunnel surgery, but she refused. “I wasn’t comfortable with that diagnosis. I had a gut feeling that was not the issue,” she says.

Later, following a routine checkup, Alta’s doctor asked if she knew that she had PsA. She was referred to a rheumatologist, who prescribed two treatments that were common in that era: gold injections and cortisone shots.

The gold injections didn’t do anything for her psoriasis or her pain but did cause painful mouth sores, which lasted for months, even after she stopped the injections. “The NPF Bulletin (now Advance) became my medical source, and I sought a different rheumatologist for help,” she says. She eventually met a rheumatologist who prescribed a systemic. “I began to have relief from my lesions as well as the pain.”

She is still taking the same systemic plus a non-steroidal anti-inflammatory drug, which together keep her lesion-free with relatively little pain. Alta says, “I have deformed hands and toes, but those are my only remaining results of psoriasis and psoriatic arthritis.”

When she recounts jet-setting to Europe or Russia, she says, “I just did it. I was excited about going and excited to be there.” She may have spent more time getting out of bed and getting moving than other people, and sometimes she had to give herself a break. Once on a trip to the Australian Outback, it was 104 degrees and she was in pain. She stayed indoors that day.

“As long as we traveled, we weren’t going to be the ones to hold up the group,” Alta says. She has followed that philosophy across the globe and to the many nonprofit causes she’s worked for, leading what she calls “a normal life” after getting through “those terrible years” before finding the right treatment.

“I haven’t let my psoriasis or psoriatic arthritis slow me down or hold me back,” she says.

Are You in Pain?

The Patient Navigation Center has resources to help you treat the pain many experience with psoriatic disease.

Get your Pain Kit today