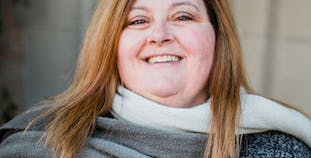 A Utah woman refuses to quit trying to find the right dermatologist.

Lisa Lambert has had enough trouble in her life.

Her aunt, who’d been taking care of her mother, died in 2002. Her father died of a heart attack in 2003. Her mother, who had survived a car accident and a stroke and was descending into dementia, came to live with Lambert and her husband. “I promised Mom I would never put her in a home,” Lambert says, looking back at all the work and worry that followed. “You should never do that.”

She had a job with the IRS. She was going to accounting school at night and taking care of her mother in her double-wide trailer with her husband, who was unemployed. Unknown to Lambert, her husband was addicted to opioids. Lambert’s mother died in 2004. Her favorite cat died soon after.

For those of you who are familiar with the relationship between stress and psoriatic disease, you can guess what’s coming.

In 2003, when Lambert was 35, psoriasis appeared in “a little line” at the back of her head. Soon it spread. “I had plaques on my body the size of my fists,” she says. It was particularly bad on her scalp.

Her primary care provider diagnosed it as eczema and recommended a medicated shampoo. When the shampoo did nothing, he referred her to the first of three dermatologists.

The Long Journey to Treatment

The first dermatologist “only spent five minutes with me,” Lambert recalls. “He never told me to get into a gown. He barely looked at me. He looked only at a plaque on my arm and called it eczema.”

The doctor recommended “hot oil” treatments for her scalp, “even though he never looked at my scalp.” This involved heating olive oil, applying it to her scalp, wrapping her scalp in plastic for an hour, scratching all the plaque off, then putting on a prescription ointment. “It felt like battery acid,” she says. Lambert was supposed to follow this regimen for two to three months, but she barely lasted two weeks. She never went back to him.

Her primary provider still had no idea what was going on, so Lambert picked a dermatologist at random from the phone book, a man with 40 years of experience. This time she prepared by wearing shorts so the doctor could see the plaques “like dinner plates” on her legs. The second dermatologist had no suggestions beyond telling her not to use a loofah.

“He didn’t even tell me what it was,” she says.

Lambert went out only at night. She had difficulty sleeping. She was on antidepressants and missing work. When she was at work, things didn’t always go well. “If I sat for too long, my skin would crack and bleed all over my desk,” she says. This was at a government agency in the years after 9/11 and anthrax attacks. On at least one occasion, office managers roped off her desk and called a hazmat team. “It was mortifying,” she says.

Demand the Best – You Deserve It

“I could’ve given up. I wanted to jump in front of a bus. But instead, I got angry,” she says. “I told myself: I’m going to find the best dermatologist in the world.”

Lambert, a lifelong resident of Utah, turned to the University of Utah, which had saved her mother after a car accident. She demanded to see the best dermatologist the school had. After a four-month wait, she met with Kristina Callis Duffin, M.D., professor of dermatology and NPF medical board member.

Duffin diagnosed Lambert with plaque and guttate psoriasis. “Kristina Callis Duffin examined me from head to toe,” Lambert says. “She spent an hour with me. She explained the whole thing to me. She was the first doctor who said ‘psoriasis’ to me.”

Because Lambert was on fertility treatments at the time, Duffin prescribed some creams to make her more comfortable. When Lambert finally tried a biologic, nearly a decade had passed since that little line of psoriasis first appeared at the back of her head. The new drug almost entirely cleared her skin in two years. “It was my golden ticket,” she says.

Today, Lambert travels the country speaking at dermatology conferences and is working with her writing partner on a documentary about psoriasis. She’s the proud mother of an adopted son. And she’s learned a surprising lesson: “I’m grateful,” she says. “Psoriasis has brought way more positive than negative into my life.”

Whether you have psoriasis or psoriatic arthritis, you deserve to find the right health care provider.