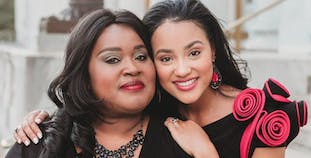 Beauty Queen Fights for Everyone With Psoriatic Disease

[Editor's Note: This story was written prior to the COVID-19 pandemic]

It was a fall day, but in Alabama that means it was hot. Heat was one more thing working against Dedra Pennington as she struggled to keep pace as a chaperone for her daughter’s third-grade class field trip. Psoriatic arthritis (PsA) pain gripped her knees and hips, causing her mobility to plummet.

Her daughter, Tiara, had been looking forward to her mom chaperoning this trip to the Civil War sites scattered around their hometown of Helena, but she knew something was wrong.

“I remember trying to stay with my mother because I didn’t want her to feel like she was being left behind,” says Tiara.

Her mom was trailing behind the rest of the group, to the point that mother and daughter’s matching shirts soon became indicators for the bus driver and tour guides that they were finally going to the next historic site.

This was the day Tiara learned that her mother was living with psoriasis and PsA. Years later, Tiara would become an advocate for the psoriatic disease community.

“It first started with school actually, because when I became a freshman in high school they instilled the importance of community service in our lives,” Tiara says. “I knew exactly what I would advocate and volunteer for and that was something locally with psoriasis.”

That moment in a little girl’s life has grown into a national campaign on behalf of the psoriatic disease community. Her campaign will grace the stage of the Miss America 2020 pageant as Tiara’s social impact initiative when she represents her home state as Miss Alabama 2019.

[Editor's Note: Miss America 2020 was crowned in December of 2019, prior to the pandemic. Camille Schrier of Virginia was crowned winner]

Tiara was born in 1998 and is the only child of Don and Dedra Pennington. She calls herself a “daddy’s girl” and is so close to her parents that she spent her 21st birthday with them instead of the typical rite of passage of going to a bar.

With a name like Tiara and her beauty-pageant lineage – her grandmother is a field director for the Miss Alabama program and her mother was in the Miss Alabama competition in 1985 – it would be more surprising if she hadn’t followed a path to pageantry.

Tiara began her journey when she joined the Rising Stars mentoring program at age 7. At Rising Stars, which is run by the Miss Alabama Organization, pageant candidates act as mentors for girls ages 7 to 11. It was after meeting with a former Miss Alabama contestant through this program that Tiara decided that, one day, she would be Miss Alabama.

Her first pageant win came in 2015 when she became Miss Shelby County Outstanding Teen. She was Miss Alabama’s Outstanding Teen in 2016 and Miss Helena High School in 2017. In February of 2019, she won Miss University of Alabama. In June, she achieved her childhood dream and won Miss Alabama.

“This is the moment I have waited for my whole life,” Tiara says.

With all the scholarship opportunities she has won through competing in pageants, Tiara’s parents are proud that she is guaranteed to graduate from the University of Alabama debt-free.

Advocate for the Psoriatic Disease Community

It’s not just the scholarship money that keeps Tiara competing in pageants. Bearing witness to the long, hard struggle her mother has faced with psoriasis and PsA, and the impact she can have as Miss Alabama and potentially Miss America, are what drive her.

In 2000, Dedra developed an “extremely itchy” rash in patches behind her ears. On her first doctor’s visit, she was diagnosed with psoriasis. Unfortunately, she wouldn’t experience such a quick diagnosis for her increasing pain and diminishing mobility.

Soon after her psoriasis diagnosis, Dedra began experiencing stiffness and joint pain in her hands, knees and hips. Walking around, getting up from a seated position and grasping and carrying items all became ordeals.

“It’s scary that something I take advantage of and other people do every day can be taken away from me,” says Dedra about losing the ability to walk and take care of herself. It took a year for Dedra to find a rheumatologist in her area who was right for her – someone who knew what her disease was, diagnosed her with PsA and started her on a biologic.

Another flare-up in 2012 caused 80 percent of Dedra’s body to be covered in psoriasis. Because of her health insurer’s step therapy protocols, which required her to try and fail several medications before she could have the one her doctor prescribed, Dedra cycled through biologic after biologic waiting for one medication to fail before moving on to the next. Meanwhile, her disease progressed.

By that point, Tiara had founded Psoriasis Take Action Alabama, a support group in Helena. The group also helped connect medical professionals and patients in the area.

Extending Her Reach With NPF

Tiara got involved with the National Psoriasis Foundation (NPF) so she could make a difference beyond her hometown.

“I was lucky enough that they were looking for community ambassadors,” says Tiara.

In 2013, she became a community ambassador, becoming the youngest in the nation at 15. She is a member of the NPF outreach committee, which advises on patient outreach and education programs, and the eastern division of the NPF Advocacy Action Network, which helps our volunteer advocates share their stories with state and federal policymakers. She has also supported and participated in Team NPF events in her area.

A high point of her and her mother’s involvement with the community was a rare opportunity facilitated by NPF, in Washington, D.C., in March 2016, when the U.S. Food and Drug Administration – the federal agency that approves new drugs including biologics – hosted the first-ever Patient-Focused Drug Development meeting for people with psoriasis. At this important open forum, Tiara and Dedra were able to talk about the struggles and obstacles that treating the disease has presented.

Another aspect of Tiara’s advocacy that she is very passionate about is eradicating the stigma that psoriasis and PsA places on young children.

Tiara hopes to continue the PsO-Fun School Tours that she implemented in 2014 as an anti-bullying campaign to educate kids about psoriasis. Her goal has been to teach diversity to kids and to show them how to be accepting of others.

The children listen to and comment on stories such as the NPF publication “The Adventures of G. Wow,” one of Tiara's favorites, since it's about a girl with psoriasis who has dreams of becoming an Olympic swimmer. She says that her main objective is to let students know that psoriasis is not contagious, and that you can be friends with kids who have psoriasis.

“I want to hone in on this,” says Tiara, “that it is not contagious!”

She estimates that she has reached nearly 500 children through this program.

Before the pandemic, in order to fulfill her duties as Miss Alabama, Tiara planned on taking a year off from the University of Alabama, where she is majoring in political science. She one day hopes to attend law school.

As for the future of psoriatic disease, Tiara hopes more funding becomes available for research as well as outreach, to educate people on the disease. Although Tiara has not developed symptoms, she says she is more scared of developing PsA than psoriasis.

“I’m worried about my way of life,” she says. “I’m scared of not being able to walk more than the skin part.”

Surprising fact: Sometimes, if I’m knocked-out tired, I will sleep with my eyes open. It almost scared my grandparents to death after a day at the water park. I’m sprawled out on the bed with my eyes wide open and my grandma walks into my room and thinks I have just died. I don’t know how they deal with me.

Last book you read: Fatal Throne, about Henry the VIII. I’m a history buff so it’s been nice to be able to read for myself while I’m out of school.

3 things you always have in your fridge: Meat-lover's pizza with bacon sausage and extra cheese, bottled water, and peach- or orange-flavored “something refreshing” popsicles.

Fill in the blank … Pageants developed ________ in you that you use as an edge in real life: Pageants for me have helped me feel comfortable with who I am. They prepare you so well for speaking in front of people.

Pets: A Yorkie, Ali, after Muhammad Ali. I choose it because he is small but mighty!

Let Your Voice Be Heard

There are many ways to get involved with advocacy.

Find the right opportunity for you