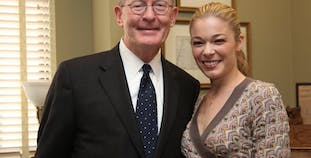 A new focus on treatment and on living healthier powered her comeback.

Country singer LeAnn Rimes has two Grammy Awards, numerous platinum and gold albums, a catalog of chart-topping songs and thousands of fans. The acclaimed star also has something that's not so glamorous: severe psoriasis.

Rimes was diagnosed with the skin disease when she was only 2. Her condition worsened throughout her childhood until, at one point, her body was 80 percent covered with lesions, including her hands, feet and midsection.

At the same time in her young life, Rimes was becoming a star, recording her first album at age 10. Her second album, Blue, went on to sell 6 million copies in the U.S. and garnered her a Grammy when she was just 13.

"As I became a performer, I went to great lengths to hide my psoriasis," said Rimes, now 26. To raise awareness about the disease, Rimes is leading a nationwide campaign, "Stop Hiding from Psoriasis," encouraging people with psoriasis to talk with their dermatologist about the impact of the disease.

She remembers times when she was so uncomfortable showing her skin that she wore two pairs of pantyhose on stage, only long dresses to award shows and jeans for appearances even in the summer heat.

Because Rimes was in the public spotlight, she endured many aggressive regimens — tar treatments, cyclosporine, methotrexate — to try to get clear. "Performing onstage when I was experiencing a flare was difficult," Rimes said. "My skin would crack and bleed, causing pain and discomfort."

Though she enjoyed a successful career and was admired worldwide, Rimes's self-esteem suffered because of her psoriasis. She felt ashamed and lost confidence in her appearance. People often stared when Rimes was in public, not only because she was famous, but also because her psoriasis was so severe. "I wanted to say to those people, and to anyone else, 'Stop staring! Treat us like you would treat any other human being.'"

Today, Rimes says she has a "new outlook." She no longer lets psoriasis define who she is or how she feels about herself. Her confidence has increased and she is leading a more fulfilling, healthy life.

Rimes attributes her change in attitude to two things. First, she worked with her dermatologist to find an effective treatment regimen to manage her psoriasis. Second, she made her health a top priority. She finds time every day to exercise. She eats right and manages stress. "Treating the triggers," Rimes called it.

She is especially diligent about dealing with stress. "Stress impacts my psoriasis. Learning to manage stress — especially in my line of work — has been key to ensuring I feel my best," Rimes said.

Though she's learned to manage her disease effectively with proper treatment and a healthy lifestyle, Rimes is aware that many people with psoriasis struggle every day with their disease.

"Psoriasis affects people both physically and emotionally," she says. "I encourage everyone with psoriasis to see a doctor. Find a treatment plan that works for you. If you are feeling isolated, reach out and ask someone for help. Remember, you're not alone."