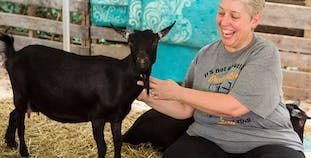 Julie Greenwood jumps on the latest in fitness trends – goat yoga – to help fund the fight against psoriatic disease.

Fads have been sweeping the world ever since the Dutch went crazy for tulips in the 1600s. Bicycles, flappers, Hula Hoops, pet rocks, dot coms – there’s no limit to the human imagination. But now we have a fad that just might become a movement: goat yoga.

“The truth of goat yoga,” says Julie Greenwood, of Cary, North Carolina, “is that sometimes it’s more goat than yoga.”

Greenwood was looking for a Team NPF do-it-yourself fundraising idea when she hit upon the obvious. She and her teenage daughter, Nora, were already doing goat yoga. “It’s fun,” she says. “People are always saying, ‘Oh, I want to come to goat yoga with you.’ So I thought, if I do this, people will come to goat yoga with me. That’s the best way that I can raise money for NPF.”

For those of you who are so far behind the times that you’re four paragraphs into this article and you still haven’t a clue what we’re talking about, Greenwood is happy to explain.

“First we sat on our mats and listened to a speech from Amanda, the farm owner, about the rules, how to hold the goats and what to expect. Then I talked for a couple of minutes. I thanked everyone for being there and supporting this cause that means so much to me,” Greenwood says.

“Then the owner said, ‘OK, those of you who are sitting near the gate, you’re going to get the brunt of this, I’m going to let them all in.’ She opened the gate and there was a stampede. The goats come in and they go crazy. They go around and meet everybody. But they’re trained for therapy. They sense your energy. Once the yoga starts, they calm down. They take their spots, but they might move around. Sometimes they find a person who seems comfortable and they lay down and stay there.”

Volunteering Beyond the Farm

Greenwood, who has lived with psoriatic disease since 1991, is a Research Ambassador for NPF. She appeared on a panel at the 2018 Research Trainee Symposium in Portland, Oregon, with fellow ambassador Carol Selby of Fishers, Indiana. So far this year, she attended an Advocacy Day in North Carolina, spoke to her state senator about the impact of step therapy, and she and her husband, Scott, participated in Team NPF Cycle in Raleigh.

Greenwood echoes many NPF volunteers when she says, “I would never have said this 25 years ago, but psoriatic disease was the best thing that ever happened to me. It opened doors that I never even dreamed were possible. It allowed me to help other people. I’m an expert in something. It isn’t necessarily something I wanted to be an expert in, but now that I am, I can use it to help somebody else’s life.”

She doesn’t mind help from non-human sources, either.

“Everybody would be happier with a goat,” Greenwood says. “I need to get some goats now.”

Team NPF: No Goat Left Behind

If you can’t join Team NPF for cycling, running, walking or an exciting Pstamp Out evening, you can create your own DIY event. You can even participate in NPF events virtually. Sorry, we don’t rent goats.

Team NPF: No Goat Left Behind

If you can’t join Team NPF for cycling, running, walking or an exciting Pstamp Out evening, you can create your own DIY event. You can even participate in NPF events virtually. Sorry, we don’t rent goats.

Be a part of Team NPF