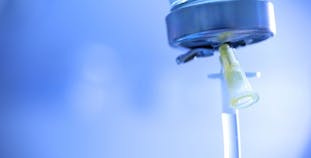 Adults can treat PsA with Simponi Aria in as few as six treatments per year.

Simponi is an injectable biologic drug. Biologics are drugs made in a laboratory from living cells, and they are the most promising class of newer drugs in the treatment of psoriatic disease. Both delivery systems, the IV infusion and the injectable, work by inhibiting tumor necrosis factor-alpha, a protein involved in systemic inflammation.

New phase 3 clinical trials of Simponi Aria showed that, at week 14, 25 percent of patients experienced at least a 20 percent improvement in symptoms, as measured by the American College of Rheumatology criteria. A placebo group showed that only 22 percent of patients showed 20 percent improvement. These results were the same in patients on stable doses of methotrexate. At week 24, patients showed improvement in physical function and an inhibition of the progression of structural damage.

Simponi Aria treatment begins with two starter doses (30-minute infusions at week 0 and week 4) followed by infusions every 8 weeks. This could mean as few as 6 treatments per year, while the injection treatment of Simponi requires starter doses at week 0 and week 2, followed by injections every 4 weeks (all 50 mg doses). Simponi Aria infusions are measured by your doctor at 2 milligrams of the drug per kilogram (2.2 pounds) of body weight. (Expect a weigh-in before each treatment.) Simponi and Simponi Aria are manufactured by Janssen.

During a day-long Patient-Focused Drug Development meeting on psoriasis in 2016, the FDA heard directly from individuals living with psoriatic disease about the challenges managing the symptoms of psoriasis. Thanks to NPF's advocacy efforts, more than 200 individuals impacted by psoriasis joined in this meeting. Participants expressed a range of perspectives including a recurring theme that patients need more treatment choices.