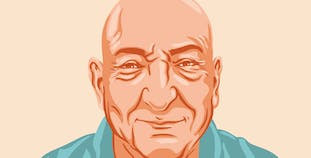 A native Uruguayan man gets help covering his treatment costs thanks to a bilingual patient navigator.

Since launching in 2016, the NPF Patient Navigation Center has helped more than 26,500 individuals in managing psoriasis or psoriatic arthritis.

Patient navigators work one-on-one with patients online or over the phone. Support ranges from breaking down the latest treatment options to finding the right health care professional to overcoming insurance hurdles.

Every person is unique, and the resources given to one person may not be right for the next. That’s why patient navigators offer personalized assistance tailored to the individual.

Since a young age, Pedro Burchio experienced occasional flares of red spots across his body. However, they would quickly disappear and Burchio would think nothing of them. It wasn’t until he was 60 and had a massive flare over most of his body that he was diagnosed with psoriasis.

Burchio , who immigrated to Sunnyvale, California, from Uruguay in the 1980s, could not afford the expensive biologics prescribed to him and was looking for financial assistance. And, as a non-native English speaker, Burchio was running into complications navigating the insurance roadblocks.

Burchio contacted the Patient Navigation Center in early 2018 and worked with a bilingual patient navigator to learn about his financial assistance options. Even though he had Medicare at the time, it wasn’t going to cover the suggested biologic.

After investigating his case, his navigator found a patient assistance program through the drug manufacturer that would help Burchio. However, to qualify, Burchio would first need to go through the tedious process of applying for and being denied Medicaid (known as Medi-Cal in California). The patient navigator helped him every step of the way, and when his denial came through, he applied and qualified for the suggested patient assistance program.

Along with the financial assistance, Burchio patient navigator also offered him resources on maintaining a healthy diet and a list of health care providers in his area.

In early 2019, Burchio contacted the Patient Navigation Center again to let them know that his treatment was working, and that, thanks to the help of his bilingual navigator, he has been living a healthy, happy life. He also has become heavily involved with NPF, attending local meet-ups and participating in Team NPF Walk events with his wife.

“The National Psoriasis Foundation has been very important to me,” says Burchio. “The access to doctors and navigators providing strong and credible information has helped me to focus on all parts of my life.”

Burchio's navigator says that there has been a huge positive change in his emotional well-being since he first contacted the Patient Navigation Center. She also discussed why it’s important that the center strives to reach a diverse community, including those who are not native English speakers.

“The embarrassment of having psoriasis, coupled with the embarrassment some feel that they can’t adequately communicate with their doctor, could lead to complications to non-English speaking patients receiving the care they need,” says the bilingual navigator.

Read More in This Series

Help for Your Specific Situation

Whether you need information on treatment options, help navigating your insurance or assistance finding a medical professional in your area, NPF Patient Navigators are here for you.

Get in touch today