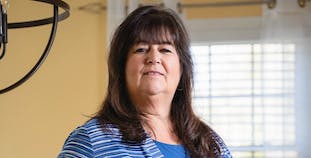 Her Nails Held the Secret to Her PsA

After years of trying to find the source of her joint pain, Jody Quinn got the answers she needed from a doctor looking at an unlikely indicator.

Jody Quinn was diagnosed with psoriatic arthritis (PsA) in 2003. The diagnosis was both a blessing and a curse for her. She finally had a name for what had been causing her joint pain and anxiety for years, but she also found that her newly named disease did not have a cure.

For a frustrating 15 years, Quinn bounced from doctor to doctor to no avail – primary care physicians, rheumatologists, orthopedic specialists and physical therapists could not get to the root of her pain and discomfort. Quinn endured bone scans and blood tests only to rule out rheumatoid arthritis. She was told that with weeks of rest, physical therapy and pain medicine, the pain would ease, but her symptoms would ultimately return – or worsen – at some point as she resumed her normal pace of life. She still had a high level of pain and discomfort and experienced difficulties when going about her day-to-day activities.

Along with her constant joint pain, Quinn had mild psoriasis and suffered from occasional flares. At a routine appointment with her dermatologist during a flare period, she brought up her fingernails. Her nails had damage that she had not previously asked her dermatologist about, until one nail got so bad that it was almost falling off.

“I said to the doctor, ‘What is up with this fingernail?’” she recalls. “He was like, ‘How long have you had that?’”

After recounting her history with her nails and joint pain, her dermatologist said, "You need to go see a rheumatologist. I think you have psoriatic arthritis."

Nail psoriasis can cause pitting or thickening of the nail, and it can make the nail separate from the nail bed. There is an important correlation between psoriatic arthritis and nail changes – the presence of the latter is a strong predictor of the development of arthritis.

Finally, Quinn’s years of aches and pains began to make sense. Turns out it wasn’t tennis elbow, as one doctor had told her. Fifteen years after her symptoms started, Quinn finally received the right diagnosis after a meeting with a rheumatologist familiar with psoriatic arthritis.

The National Psoriasis Foundation (NPF) launched the PsA Diagnostic Test grant to fill this gap. The new grant mechanism was designed to fund the development of a diagnostic test for psoriatic arthritis that may improve detection of PsA and reduce diagnostic delays and instances of misdiagnoses. Lessening the risk of permanent joint damage and boosting quality of life will ensure that members of the psoriatic disease community are not facing the 15 years of challenges that faced Quinn.

“It is vital that there is a diagnostic test developed for psoriatic arthritis,” Quinn says. “As in my case, it would prevent years of unnecessary suffering, joint and tendon pain and irreversible joint damage. Also, the physical and emotional stress of being in so much pain and not knowing why would be avoided.”

Connect with others and discover interactive tools to help you care for your mental health and thrive with psoriatic disease.