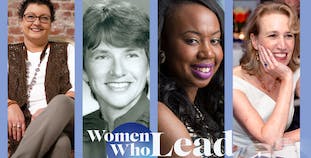 From the founding of NPF to the organization you see today, women have led the way.

Women have played an essential role in the progress and success of the National Psoriasis Foundation (NPF). For 55 years, women volunteers, leaders, researchers, and health care providers have pushed NPF from a small, Oregon-based organization to the nonprofit world-leader in psoriatic disease research. Because of their various contributions to the advancement of treatments for psoriasis and psoriatic arthritis (PsA) and their commitment to educating and supporting this community, NPF now represents more than 8 million people in the U.S. who experience psoriatic disease.

In June, hundreds will gather in Chicago, IL to honor April Armstrong, M.D., MPH, Dafna Gladman, M.D., and Nicole Ward, Ph.D. for their contributions to the community at our annual Commit to Cure Gala: Celebrating Women Who Lead.

As excitement builds for the celebration of Drs. Armstrong, Gladman, and Ward, the NPF is looking back on the countless women leaders who spurred the success of the organization while providing life-changing contributions to this community. No attempt to capture these contributions may be done comprehensively – there are just too many who have made an impression to count. So let’s take a look at just a few of the women who have shaped the landscape for those impacted by psoriatic disease.

A Timeline of Woman-Led Accomplishments

1967 Beverly Foster connects with others who have psoriasis thanks to a classified ad in a local Portland, Oregon newspaper. Hundreds responded. The group began gathering in small meeting rooms and quickly it became clear that more space was necessary. Within a year, NPF had been formally founded and the nationwide impacts of the work done by this group began.

1975 Sheri Decker began as a volunteer with NPF. She soon became an employee. Among her many accomplishments was the creation of The Bulletin, which eventually became NPF Advance™ magazine. She also created the first patient education program for NPF and was a part of NPF long enough to help with the launch of psoriasis.org in 1996.

1979 Gail Zimmerman began as the first Executive Director in NPF history. She would serve nearly three full decades. Zimmerman was essential in moving NPF into a prominent national position and amassing a wealth of dedicated volunteers and professional staff that set the table for the NPF of today.

1981 Barbara Butler, who lived with lupus and advocated for her community, made a key introduction between Zimmerman and members of Congress. Butler’s networking helped NPF earn National Institutes of Health (NIH) support for the first psoriasis research workshop in 1989.

1990 Alice Gottlieb, M.D., Ph.D. joins the NPF Medical Board and serves for over 25 years. Dr. Gottlieb was among the first scientists to prove that psoriasis involved the immune system. Her research provided the foundation for biologic drug development to treat psoriatic disease.

1992 Pam Morgan, RN, and Joan Shelk, RN, develop and teach the NPF phototherapy training course for nurses and technicians – the first such course offered in the U.S. They would train over 1,000 people in the following decade.

1993 Carmen Chevres de Mummey joins the NPF Board of Trustees (later named the Board of Directors) after leading an NPF networking group in the Los Angeles area, where she also provided individual counselling and support to the members. Her community building efforts included patient support, fundraisers, and NPF committee and conference participation.

1996 Dorothy Jones leaves a bequest to NPF, the will of she and her husband Lyle. Dorothy was an NPF volunteer in Portland during the 1970s and 1980s. In 2003, the bequeathed gift was large enough to establish the first cash reserve for NPF.

2003 Anne Bowcock, M.D., Ph.D., alongside Alan Menter, M.D., and other colleagues, with NPF funding and samples from the National Psoriasis Tissue Bank, identified three genes linked to susceptibility for psoriasis.

2005 Dr. Gladman and Christopher Ritchlin, M.D., who are NPF-funded researchers, along with colleagues, publish clinical trial results for adalimumab as a treatment for PsA. Adalimumab would become Humira, one of the first biologic medications approved for psoriasis and PsA.

2012 Marilyn Sime, Ph.D., RN, a longtime, generous supporter of NPF and professor emerita at the University of Minnesota School of Nursing, provides funding for the A. Marilyn Sime Discovery Grant.

2013 Dr. Armstrong serves as first author on Undertreatment, treatment trends, and treatment dissatisfaction among patients with psoriasis and psoriatic arthritis in the United States: findings from the National Psoriasis Foundation surveys, 2003-2011. This paper demonstrates that widespread treatment dissatisfaction exists, and that non-treatment and undertreatment of individuals living with psoriasis and psoriatic arthritis remains a significant problem in the United States.

2014 Kathleen L. Gallant, NPF volunteer and board member, earns the 2015 Global Health Champion Award for her work leading the effort, on NPF’s behalf, to have the World Health Organization member states adopt a powerful resolution to recognize psoriasis as “a chronic, non-communicable, painful, disfiguring, and disabling disease for which there is no cure.”

2016 Dr. Ward, a member of the NPF Scientific Advisory Committee and multi-time recipient of NPF research grants, becomes the first non-M.D. and first woman to be awarded the Eugene M. Farber Lecture at the Society of Investigative Dermatology meeting.

2016 Kendall Marcus, M.D., the director of the Division of Dermatology and Dental Products Center for Drug Evaluation and Research at the U.S. Food and Drug Administration (FDA), welcomes the psoriatic disease community to the FDA White Oak campus and online for one of the most successful Patient Focused Drug Development meetings in the history of the program.

2016 Amy Paller, M.D., is the first woman honored as part of the Commit to Cure Gala series.

2016 Dr. Armstrong is the first author on treatment recommendations, From the Medical Board of the National Psoriasis Foundation: Treatment targets for plaque psoriasis. It was published in the Journal of the American Academy of Dermatology.

2017 Rachel Lichten testifies to the Ohio Senate Health, Human Services, and Medicaid Committee in support of step therapy reform legislation. Rachel and her husband Jason Lichten, M.D., who serves on the NPF board of directors, also participated in a television interview for the NBC Columbus affiliate. They share the moving story of their son’s struggles with psoriasis and step therapy. On January 4, 2018, Ohio Governor John Kasich signs step therapy legislation into law.

2018 Jennifer Pellegrin and Shirley Wallace are featured in a PsA Awareness Project – a set of patient films highlighting the importance of treating PsA and receiving optimal care. Jennifer and Shirley shared details of their PsA diagnosis and how they live their lives despite having the disease.

2018 Sue Jaqua successfully hosted a bingo night in Portland, Oregon, to benefit NPF. It is so successful, for four years running, that NPF now holds Pstamp Out events in 10 cities across the U.S. Sue’s events served as a model for dozens of events in the years that followed.

2019 Dr. Paller is the first NPF Psound Bytes CME podcast guest. In the episode, Dr. Paller addresses the use of biologics in youth along with her research in lipoproteins and targeted topical delivery systems using gene suppression and nanotherapy.

2019 Rachel A. Clark, M.D., Ph.D., delivers the NPF Cure Symposium keynote address, “Immunologic Insights into Psoriasis,” a translational overview of the role of cutaneous resident memory T cells in human skin diseases, including psoriasis. Her overview included potential strategies to selectively eliminate these cells – a process that may prevent recurring flares of the disease.

2019 Tiara Pennington is crowned Miss Alabama. She was the first African-American to be crowned as Miss Alabama. Pennington uses her platform to raise awareness for psoriasis and raise funds for a cure, in honor of her mother and uncle who both live with psoriasis.

2020 Sue Shoenberg Endowment for Early Career Research Grants is funded with a $750,000 gift from Robert Shoenberg to honor his late wife Sue, who lived with plaque psoriasis for decades.

2021 Stacie Bell, Ph.D, former NPF Chief Scientific and Medical Officer, leads the effort for NPF to obtain a significant grant from the Centers for Disease Control and Prevention. This funding will improve health outcomes through increased education of psoriasis as a chronic, immune-mediated, systemic inflammatory disease.

2021 Leah M. Howard, J.D., who had been serving as the Chief Operating Officer of NPF, assumes the role of NPF Interim President and CEO.

2022 All the women who have played a role in the success of NPF are formally honored with the creation of the Commit to Cure Gala: Celebrating Women Who Lead.

As we honor all the women who led NPF and this community over the last 55 years, we ask that you think about the women in your life who have led or inspired you. It could be a sibling, mother, or friend. It could be a physician, a dermatologist, or a caretaker. No matter who it is that inspires you, we invite you to make a gift in their honor to continue the progress these women, and others, have made for the psoriatic disease community. All those with gifts made in their names will be honored during the Celebrating Women Who Lead Gala.

Make a gift in honor of a woman who has had a positive impact in your life.