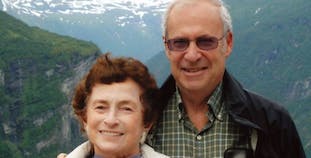 Honoring the Past and Planning for the Future

Susan Schwartz met her future husband, Robert Shoenberg, at the University of Michigan in 1960. They were married in 1962. In addition to the life partner she wanted, however, she also gained one she didn’t want: plaque psoriasis.

“Sue’s psoriasis got worse and worse over the years,” Robert Shoenberg recalls. “Treatments such as topicals, light therapy and others were palliatives, not much more than that. Nothing worked. She simply suffered with it.”

But Sue Shoenberg, who died in 2016 at the age of 77, never let herself be defined or limited by her disease.

“She kept plugging away through the whole thing,” Robert says. “Sue was very interested in civil rights, in human rights issues. She supported candidates who supported the causes that she cared about.” She was active with the Human Rights Commission in Montgomery County, Maryland, including service as a volunteer mediator in employment discrimination cases. In 2002 she was inducted into the commission’s hall of fame. They even named a conference room for her.

Sue was also mother to two daughters, and she made sure everyone always had a birthday party, was “a good cook and a better baker,” according to her husband, and traveled the globe. “We loved France, but there were so many good trips,” Robert says. “We set foot, at least for a few hours, in 70 or so countries. And we traveled in the United States.”

Sue learned about the National Psoriasis Foundation (NPF) in the 1980s. That’s when the Shoenbergs began making annual contributions. There weren’t as many NPF activities back then, but Robert remembers a field trip to the National Institutes of Health (NIH) in nearby Bethesda, Maryland.

“NPF invited us to come to the NIH to meet with some researchers who were doing something that was related to psoriasis,” he recalls. “It was enough of a relationship that it was interesting. It was fun to do that.”

In the wake of his wife’s death, Robert decided that their annual contributions were not enough. He decided to make two large gifts.

“One was to something I was particularly interested in, which is our local community college, and one to something that Sue was particularly interested in,” he says. “Sue had always wanted to do more with the Foundation, so first I increased our annual gifts over the three years since she died. I wanted to honor her and her courage in pushing on with her life, so I thought I’d do something large enough to make a difference.”

The result of Robert’s generosity and his desire to honor his wife was a $750,000 gift to establish the Sue Shoenberg Endowment for Early Career Research Grants.

A Boon to Early Career Researchers

The Sue Shoenberg Endowment will provide $50,000 for one year to a graduate student or a postdoctoral researcher. These grants not only will help early career researchers work on psoriatic disease-focused projects, they will also usher the researchers into the community of scientists, clinicians and patients involved with NPF-funded research.

An early career grant is an essential part of the research funding process because it allows the evaluation of new and innovative ideas. In an NPF film on NPF research programs, Alexis Ogdie, M.D., an assistant professor of medicine and epidemiology at the Perelman School of Medicine at the University of Pennsylvania, Philadelphia, and a member of NPF’s Scientific Advisory Committee, says, “These grants from NPF are incredibly important for getting people interested in psoriasis and psoriatic arthritis. Young researchers can go into a lot of different things. To get them hooked early with a grant is so impactful.

Ogdie credits an early career grant from NPF as having a major impact on her career.

“One of my first grants was a Discovery Grant from NPF in 2012,” Ogdie explains in the film. “That formed the basis for my K award from the NIH. The K award is a career development award that gives you five years of protective funding. It really launches your career as an academic investigator. I can’t emphasize enough how important that NPF grant was in terms of getting that K award.”

The Sue Shoenberg Endowment awardees eventually will be able to compete for future NPF or NIH funding and, hopefully, embark on long-term careers in psoriatic disease research. Robert may participate in the endowment selection process for the early career applications deemed meritorious in the peer review process. If he does participate, he will meet with these early career scientists to learn what they’re doing and what progress they’re making. The first award will be announced in June 2020.

Honor the Departed with a Memorial Gift

To keep the memory of your loved one alive, or to let friends and family know how much you love and admire them, consider a donation to NPF. Every gift makes a difference.