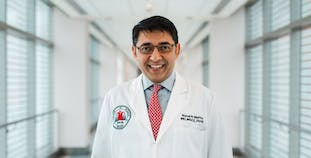 Nehal Mehta, M.D., is an NIH researcher with an impressive track record. NPF helped him get there.

Interviewing Nehal Mehta, M.D., is like taking a crash course in speed-listening. In one short phone call, he sprinted from the effect of chronic inflammation on atherosclerosis to teaching cardiologists computed tomography angiography to injecting nuclear tracers in the bloodstream to his love of the study of fat and inflammation. He had just emerged from a conference at Cedars-Sinai Medical Center in Los Angeles, and his heart was racing.

“We spent the day talking about oxidation of lipids and coronary disease. Very cool. Like the coolest thing you could talk about,” Mehta says. “We had them on the edge of their seats!”

We also discussed the achievement that had closed out 2019 for him: In December, Mehta received tenure at the U.S. National Institutes of Health (NIH), where he is now a Lasker Senior Clinical Investigator at the National Heart, Lung, and Blood Institute, one of the 27 institutes and centers that make up the NIH. He gives much credit for his success to the National Psoriasis Foundation (NPF), and to a chance meeting with Joel Gelfand, M.D., in an elevator at the University of Pennsylvania.

Mehta graduated from medical school in 2001 and went to the University of Pennsylvania for his residency in internal medicine. “That’s where I really picked up the love for fat and inflammation,” he says. “In 2006 at Penn I was a cardiology fellow, and I kept seeing in my clinic all of these obese patients having heart attacks. I started bringing in people and biopsying fat.”

Mehta and Gelfand met on an elevator two years after Gelfand had published the seminal 2006 Journal of the American Medical Association paper “Risk of myocardial infarction in patients with psoriasis.” At the time, Gelfand was a member of the NPF Medical Board.

Mehta recounts their meeting: “Joel said, ‘I’ve been looking for a cardiologist to study inflammation,’ and I said, ‘Well, I’m a cardiologist who studies inflammation.’ We were friends from that point forward. He invited me into his clinic. I found that psoriatic disease patients are extremely willing and able to participate in research and really nice to clinical researchers.”

Gelfand, a dermatologist and epidemiologist, needed some “mechanistic imaging work,” Mehta says. “He needed cardiology to substantiate some of his observations and hypotheses regarding systemic inflammation, and that’s where I saw my opening. I worked in a lipid lab, I worked in a nuclear lab, and I brought him the idea of why don’t we just inject a nuclear tracer and see where it tracks? The nuclear tracer would show us that psoriasis is more than skin deep.”

Gelfand and Mehta wrote a proposal for a grant, and in 2010 NPF funded the research. “Thanks to that NPF grant, we found the first patients that allowed us to make our observations,” Mehta says. “The nuclear study proved that systemic inflammation was present.”

Mehta published a paper with Gelfand in 2010 (“Patients with severe psoriasis are at increased risk of cardiovascular mortality” in the European Heart Journal). Although Mehta left the University of Pennsylvania in 2012 for a position at NIH, he and Gelfand continue to collaborate and, in Mehta’s words, “to move the dial.”

“The Foundation has been here for me all along the way,” Mehta says. “It is a great, great synergistic relationship. NPF provided funding that was instrumental early in my research program that helped get me tenure. They’ve been a strong partner ever since.”

Tenure brings with it new responsibilities – Mehta is now teaching computed tomography angiography to cardiologists investigating coronary artery disease – but it also comes with a gift: funding for a large randomized trial of psoriatic disease patients, investigating the effect of biologic therapy versus other types of interventions on coronary plaque. “They gave me the money, two assistants and a new CT scanner!” says Mehta.

“Organizations like ours are important because, though we don’t exclusively fund investigators who are early in their career, we do support a lot of them,” says NPF president and CEO Randy Beranek. “We’re willing to take risks on innovative ideas from great people who may not have a lengthy track record.”

NPF is proud to have played a part in Nehal Mehta’s ongoing success. You can play a part, too, by giving generously so we can continue to fund the research that will someday lead to a cure.