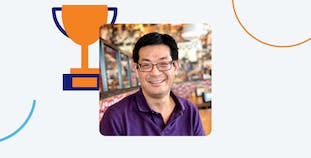 Meet Your 2021 Volunteer of the Year

Howard Chang was just 8 years old when he had his first visit to a dermatologist. He remembers sitting with his father in the waiting area at the University of California San Francisco for hours. When he eventually was seen by the doctor and residents, he was quickly given a diagnosis: plaque psoriasis.

Throughout his journey, Howard has tried more treatments than he can even remember. His teenage years were particularly difficult. There were few treatment options available. “No doubt, those living with chronic illness can relate to the extent of anxiety, discomfort, and lack of energy it has caused me,” says Howard. “It has been quite a journey, with the proverbial ups and downs”

In 2011, Howard was reintroduced to the National Psoriasis Foundation (NPF) and attended the More Than Skin Deep conference in Los Angeles. In the years that followed, he initiated community groups, he became a social media ambassador, and today he actively supports Team NPF events in San Francisco and Sacramento. Howard has attended NPF conferences and the annual Commit to Cure Gala. He continues to be an active NPF social media volunteer, who has been interviewed for several articles and publications. Howard has even consulted and partnered with pharmaceutical and health companies as a psoriasis patient expert. In 2020, he was interviewed for a Psound Bytes™ podcast episode where he shared his “don’t give up” philosophy with listeners.

In 2007, Howard started writing a psoriasis blog that eventually became The Itch to Beat Psoriasis at Everyday Health. Later, he launched his own website, PsoHoward.com, which is dedicated to health, well-being, and wholeness. Howard shares reflections and experiences living with psoriatic disease, encouraging patient empowerment, advocacy, and education.

Howard is a long-time advocate for those who live with psoriasis or psoriatic arthritis, and he is always looking for more ways to advance the advocacy work done by NPF and volunteers. He is currently the co-chair of the Western Advocacy Committee (WAC) and has taken on a leadership role to help build up other volunteers so they feel comfortable advocating for themselves and the community. Over the years, Howard has given countless hours to advocacy work with NPF through the WAC, annual Capitol Hill Days, and California Advocacy Days in Sacramento.

“NPF is only able to achieve our mission and strategic plan because of the hundreds of people who volunteer their time, talents, and efforts,” says Leah Howard, J.D., Chief Operating Officer of NPF. “Howard Chang is the perfect recipient of our Outstanding Volunteer Leader award. His work, generosity, and dedication have helped better the lives of the 8 million people in this country who experience psoriasis or PsA. We are so grateful for all he has done for NPF.”

Howard is an ordained minister who has worked in churches and university settings for over 20 years and holds a Doctor of Ministry degree from Fuller Theological Seminary. He grew up in the San Francisco Bay Area and now lives in the greater Sacramento, California area with his wife, Lori, with whom he has three adult children.

Please join all of us at NPF in congratulating Howard Chang on this well-deserved NPF Outstanding Volunteer Leader award. Thank you, Howard, for all that you do for NPF and for the community impacted by psoriatic disease. We are all better off because of your dedication and effort. You are a true example of the embodiment of the NPF Volunteer of the Year.

Meet Jenn Pellegrin, our previous NPF Volunteer of the Year.