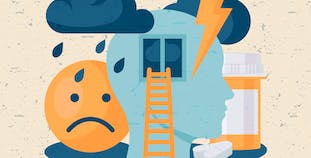 There is no perfect way to manage chronic pain. Here's how some people deal with it.

Leaphida Hollister’s pain was so excruciating that, as a new mother, she sometimes had to crawl after her crawling baby because she couldn’t walk.

Her psoriasis started as a seemingly innocuous spot on the back of her head at age 23. The psoriasis was trouble enough, especially after she gave birth to her first child, a son. But then, in addition to the flares, she began to experience pain in her fingers from what was soon diagnosed as psoriatic arthritis (PsA). The stress mounted when the family moved across the world, from her native Cambodia to Seattle, and her 1-year-old daughter started having seizures. Hollister was in pain all the time.

Where does chronic pain come from? And what can you do about it?

“Chronic pain is not strange and spooky. It’s not imaginary. It’s what’s happening to you. People can’t see it, so they say it’s all in your head. That’s literally true, but not in the way they mean,” says Arthur Mandelin, M.D., Ph.D., an NPF medical board member and a rheumatologist at Northwestern University’s Feinberg School of Medicine in Chicago.

Mandelin views chronic pain as a filtering problem in the brain. He gives the example of two friends talking in a restaurant. “Normally, you don’t have trouble conversing with the person across the table from you. You filter out the other people, even though you could probably hear bits of conversation from people three or four tables away,” he explains.

“The experience of pain is not just in your nervous system, it’s in your whole life. Some people with chronic pain feel that it’s taking over their life,” Mandelin says. “Low-grade pain, day after day, can drag a person down,” like an undertow when you’re swimming in the ocean.

Because Mandelin says that it may be impossible to reduce chronic pain to zero, “despite what all the TV commercials suggest,” he believes you must develop ways to adjust and cope with what may be the new normal. Plan your life around the pain, with the pain,
he says.

“It’s not so much whether you have chronic pain or fatigue or how bad they are, it’s how much of your life do you feel you control,” he says. “What’s really important is the intensity of the pain and how tired you are and what you’re doing about it.”

Mandelin then moves on to sleep quality. “Frankly, as our population gets heavier and heavier, we’re running across more cases of undiagnosed sleep apnea. Fatigue can amplify your pain,” he says. Sleep apnea, he explains, is one of the components of chronic pain that’s not involved with PsA. “Successfully addressing sleep apnea won’t fix the whole world, but it can at least fix your fatigue. It won’t fix your chronic pain but it helps.”

He is an advocate of sleep studies and the use of CPAP devices; he cites the strides in sleep technology over the past few years. “Many face masks don’t even look like masks,” he says, though he acknowledges that adapting to these devices may not be easy. “You have to commit to it, grit your teeth and get through that first month. If you can start getting enough sleep, many things about your health and your overall life will improve.”

Get more advice for better sleep with our Healthy Sleep Guide.

Pain and the Brain

They don’t make pain like they used to. Just ask Daniel Clauw, M.D.

“When I was trained as a rheumatologist 30 years ago, we didn’t know anything about the role of the brain in who has pain and who doesn’t,” he says. Clauw is the director of the Chronic Pain and Fatigue Research Center at the University of Michigan and a member of the Chronic Pain Research Alliance Scientific Advisory Council.

“We thought everyone with the same diagnostic label could be treated uniformly for pain,” says Clauw. “Well, you can’t treat chronic pain based on the label. You have to ask, ‘What is the underlying mechanism that is driving the pain?’ ”

For many people, chronic pain might come from the part of the body damaged by an injury or a condition such as PsA. This is the type of pain that you can point to with your finger. But your pain might also come from the brain and central nervous system. If the pain is actually in your brain, Clauw explains, you won’t point, you’ll make a circle. And that circle could move.

Pump Up the Volume

Clauw explains we have a volume control setting that our brain uses to process pain. He gives as a metaphor the amplifier for an electric guitar.

The setting of your amplifier may have just as much to do with the pain in, say, your knee as what’s physically wrong with your knee. “People with a lot going on in their knee might not feel any pain,” Clauw says. “But other people might have a higher amp setting. The knee is not where the fundamental problem is in those conditions. The fundamental problem is the volume setting,” he says. “It makes everything seem to hurt.”

Pain that emanates from the amplifier in the brain is called centralized pain. Clauw explains it’s common in conditions involving the immune system. It’s usually accompanied by other central nervous system symptoms, such as fatigue, mood changes, sleep disorders and memory loss.

“Women on average have inherently higher volume control settings than men,” Clauw says. He estimates that chronic pain disorders are up to twice as common in women as in men.

A 2011 report called “Relieving Pain in America” backs Clauw’s claim. The report, from the Institute of Medicine, now the Health and Medicine Division of the National Academies of Sciences, Engineering, and Medicine, estimated that four in 10 American adults live with chronic pain disorders – the majority of them women.

What This Means for You

Clauw believes that roughly half of all people who have PsA experience some degree of centralized pain – and for these folks, treating the joints involved with anti-inflammatories, biologics or other therapies might not ease the pain. This is because centralized pain extends beyond the joints.

He speaks candidly in a YouTube video. “One of the problems we have in pain treatment is that all of our drugs sort of suck,” Clauw says. “They’re only modestly effective.”

You can use drugs to manage hypertension, Clauw notes, but not chronic pain. Nonsteroidal anti-inflammatory drugs, for instance, work well for pain from actual injuries, such as a broken leg. They most likely won’t help with pain from the brain.

Leaphida Hollister, who is now 46 and living with her husband and daughter outside Los Angeles, looks back at the early years of her disease. She was diagnosed with psoriasis and PsA within a couple years of first noticing that small spot on her head. “It’s just life. You just accept it,” she says.

That philosophy took years to develop.

In 2001, when she immigrated to the U.S., she was introduced to a radically different climate. Her fingers and toes swelled. She and her husband had to take their daughter to the emergency room almost every week because of her epilepsy.

“I was seeing a neurologist at the University of Washington. The pain pills he was giving me didn’t help,” she recalls. “I asked him, ‘Are you doing an experiment on me? Please do not do an experiment on me. I am the wrong person!’ ”

After trying non-biologic systemics, Hollister’s rheumatologist prescribed a biologic in 2006. The biologic got her psoriasis under control and took away most of her pain, she says, unless the weather changes or “if I get sick. Then I have to stop the biologic, and the pain and stiffness get worse.”

Hollister has pain in her toes and hands and has dactylitis, or swollen “sausage” fingers. Sometimes her pain moves around, appearing in her elbows, back and shoulders.

She sees her rheumatologist every six months for a blood test and reports that she’s been “clear” of inflammation for a long time.

Years ago, Hollister decided that she had to learn how to be positive. “Change your mood,” she says. “The bottom line is keeping the inflammation under control. With no inflammation, I can do things.”

Happiness, she says, is the best medicine.

4 Tips From Someone Who’s Been There

Leaphida Hollister has had psoriasis and PsA for two decades. Here are her common-sense strategies:

The Chronic Pain Kit has tips and resources to help you, track your pain, understand pain management options and talk about pain with your family, friends and your health care provider.