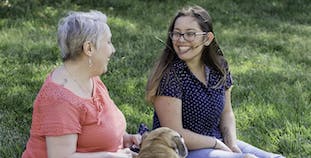 Mother and Daughter Bond Against PsA

Nora Yechou has never known her mother when she wasn’t in pain. Here’s how PsA changed both their lives.

It’s difficult to pinpoint the moment when the mother began asking the daughter for help, but both agree on the stack of dinner plates.

Julie Greenwood has psoriasis and psoriatic arthritis (PsA). On that day more than 10 years ago, the stack defeated her. She couldn’t carry it. So she turned to her little daughter, Nora Yechou, and asked her for help.

“I have pretty distinct memories from when I was younger and she got injured pretty often, or she was in pain pretty often. There were a few times when she fell and got injured,” Nora, who is now 17, says of her mother. “I remember not understanding why she needed help, but I did it anyway. I carried the plates.”

By the time Nora was 10, she was caring for her mother without prompting. When Julie appeared to be overdoing it, Nora stepped in. “I’d say to her, ‘You need to stop taking care of things. I’ve got it,’” she remembers. “Because she was trying to clean the kitchen or trying to do things before bed. And I’d say, ‘Are you crazy? Go to bed.’”

Neither of them can remember having a conversation specifically about psoriatic disease. “We talked in bits and pieces here and there,” Nora says. “But in the beginning, I don’t remember when you told me about it. I was too young.”

At 16, Nora began experiencing pain in her right wrist. She was diagnosed with psoriasis in January 2018 and with PsA in September 2019.

“There seemed to me to be a pattern between my psoriasis and my pain,” she says. “I recognized the pattern from having watched my mother. And now I completely understand why she asked me to carry those plates. I had to start asking her for help in that same sort of way.”

Her psoriasis is, in her words, “not too bad.” She had some psoriasis on her scalp when she was diagnosed, but she believes it’s improved. Now she mostly has inverse psoriasis. She has painful flares, and with that and her PsA, she’s had to make a few changes in her lifestyle. For example, she’s no longer a drummer in her high school marching band. She switched instead to the chorus so she could still be involved in music.

Mom to the Rescue

Nora relies on her mother not just for her lifelong example of strength and grace, but for her knowledge about their disease.

“She’s been super-helpful with the insurance stuff and how to talk to doctors,” Nora says. “When I got diagnosed, the dermatologist wanted to start me on a biologic. We’ve been having issues with insurance. I didn’t know about all of this. She’s handling it a lot better than I am obviously because she has a lot more experience.”

Her mother, Nora says, has also taught her how to talk to doctors. “I’ve never been good at explaining the severity of things and how much they affect me, but she’s always told me you have to tell them that this is making it hard to go to school,” Nora says. “She’s always been my biggest advocate. Even when I wanted to give up going to doctors, because they kept dismissing me and saying, ‘Mmm, that’s not arthritis,’ she’s always said, ‘We’ll find the right doctor, we’ll figure this out.’”

Julie credits encouragement from the Patient Navigation Center for helping Nora find a knowledgeable doctor. “They helped to keep us going,” she says. Nora, who was not able to find the right pediatric rheumatologist, will go to her mother’s rheumatologist once she turns 18.

As for her mother’s experience with PsA, Nora says, “It makes me sad that she’s gone through so much pain. But I’m so thankful that I have the mom that I have.”

Living with psoriatic disease can be challenging, especially if you’re a teenager. That’s why NPF created Our Spot, a dedicated place for youth and their parents.

Visit Our Spot and get connected today