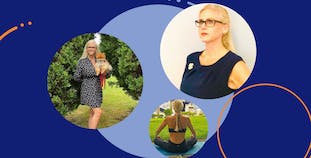 Carin Bennett shares her challenges and frustrations with pustular psoriasis and PsA.

A few years ago, the life of Carin Bennett was abruptly altered. She went from being an energetic professional who was working out two to three times per week and practicing yoga daily while also practicing law, to a woman struggling to get out of bed in the mornings.

In 2018, she was severely injured in a car accident. While stopped at a red light, Bennett, who lives in Jacksonville, Florida, was hit from behind by a woman driving 80 miles per hour. Her car was then thrust under a truck in front of her and hit again by another car. As a result, she sustained significant injuries to her neck, fingers, ribs, and brain.

While undergoing physical therapy for her injuries, Bennett began to develop what looked like tiny pus-filled blisters on the palms of her hands and soles of her feet. The blisters began to pop and crust, and her skin began to crack deeply and peel. Her skin itched and burned terribly.

“I had raw palms, raw soles, and I couldn’t walk. I couldn’t open a water bottle. I couldn’t open a door. You can't groom yourself,” she says. She wrapped her hands in gauze and wore gloves — more to hide her skin than for protection. It was uncomfortable to be in public with her hands and feet wrapped in gauze, and fluid from the affected skin would often seep through her wrappings. “People think you're contagious and disgusting. It’s isolating,” she says.

Her body also ached from what she now knows is psoriatic arthritis. Between the cracking skin and the constant pain, it felt like walking on burning knives, she shares.

Three different health care providers misdiagnosed her with ringworm and prescribed treatment, but her condition continued to worsen. Finally, she saw a dermatologist who diagnosed her with palmoplantar pustulosis, a rare and often painful type of pustular psoriasis. As the doctor explained to Bennett that she had an immune-mediated chronic disease that would have to be managed the rest of her life, she remembers feeling frightened and confused. She was still processing and healing from her car accident and knew nothing about psoriasis.

As her dermatologist went on to explain the treatment plan, she felt more frustrated. Bennett was told it could be a year before she could access the treatment that would likely improve her condition because insurance would require that she try and fail several other treatments first – a process referred to as step therapy.

“I started crying. I mean, what am I supposed to do?” she says.

It took her nearly a year to get a diagnosis, and then she was told it could be another year before she had a treatment that would really make a difference. So, she started with topicals, received phototherapy treatment, began oral systemic treatment, and then eventually switched to biologics. It was during that time that Bennett learned that some of the stiffness, aching, and pain that she experienced were due to PsA, and not from injuries from her car accident as she had previously thought. Treatments for the pustular psoriasis and PsA required frequent visits to a dermatologist – sometimes twice weekly – and a rheumatologist, whom she sees either monthly or every other month.

Not only was she enduring ongoing symptoms related to psoriatic disease and the financial pressures of treatment, but the treatments themselves were often painful. She began receiving multiple injections directly into the palm of her hand and fingers and several injections into the soles of her feet and toes to reduce symptoms so that she could walk during a flare up. She also had to manage the side effects of her various treatments, which in her case included severe headaches and frequent vomiting, which she says significantly impacted her quality of life.

Now, Bennett manages her disease with the help of a dermatologist, rheumatologist, and an integrative medicine specialist. She is currently on a biologic treatment as well as an oral treatment. In addition, she focuses on complementary measures, such as a diet she describes as anti-inflammatory. She says that currently, flares still occur about once every two to three months.

It takes work to stay healthy, she says. Not only will stress potentially induce a flare, but so could another illness.

“I have found that if I am not regimented with what I eat, with my medicine, with my exercise, and with my work, that my [symptoms] will get worse,” she says.

Bennett continues to practice yoga even when her range of motion is limited, and she is working on meditation and breath work to manage pain and stress.

At 49, she uses her experience to advocate on behalf of other people with psoriasis. Through her involvement with the National Psoriasis Foundation (NPF), she has shared her story with lawmakers. She hopes to inspire changes that would make it easier for others to access the treatments they need, faster. That way, others do not have to endure the same delays that she had experienced.

To others who find themselves on a similar journey, she says first, “don’t be ashamed to ask for help.” As soon as she requested information from NPF, she was connected with a Patient Navigator who provided her with resources and put her in touch with support groups. The NPF Patient Navigation Center can also help with finding health care providers and navigating access to treatments.

“You have to treat all parts of you,” says Bennett.

This rare type of psoriasis can be difficult to treat and live with, but dermatologists may soon have more effective, targeted therapies.