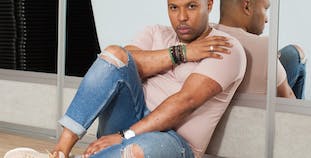 No, It’s Not Contagious

A Dominican-American man with psoriasis fends off the usual annoying questions, battles his anger, searches for the right treatment and helps raise awareness.

I’ve been living with psoriasis since May 2014. Four years ago I was living a normal life: working, traveling and figuring out what direction I wanted my life to take as I was embarking on my thirties. All was well until one morning I noticed what appeared to be a small rash on my right leg.

I thought it was a simple allergic reaction. In a short period of time, it spread throughout my body, covering my legs, back, torso and arms. A month later, with two biopsies and a full jar of topical cream treatment under my belt, I was presented with the news that psoriasis had made itself comfortable in my body.

My face turned into a question-mark emoji. What in the world was psoriasis? I had never heard of psoriasis before. Neither had my family or friends. Apparently, “the P,” as I call psoriasis, is a disease not a lot of people know of in my community. Imagine the frustration having to describe what “the P” is to my Dominican relatives and friends who thought I had a very bad rash, or raquiña, as Dominicans call it.

Imagine having to explain your disease to them and others all the time. You don’t want to get too medical, trust me. It opens a box of more uncomfortable questions. How about the number one question? Ready? Wait for it: Is it contagious? I don’t know what was worse, the questions or the stares. People looked at me almost as if I were an alien.

I endured the physical pain with unbearable itching in my whole body, to the point where I had to take prescription sleeping pills that would help me sleep. And on top of that was the psychological instability. I couldn’t help being self-conscious about my appearance, what others were thinking of me, and the embarrassment of leaving a trail of flakes on my path. I couldn’t do normal things many would consider normal, such as shaving, showing off my “summer body” that I worked so hard on in the winter and spring, or getting a haircut – the barber refused because he assumed I was contagious.

My whole life changed drastically: my diet, going in for doctor’s visits at least weekly, changing my laundry detergent, even my way of thinking. Oh, yes, your mental state has a lot to do with how your body deals with “the P,” which I didn’t manage until way later in the game.

When I first was diagnosed with psoriasis, I was not in denial because my body reminded me that it was real. But I was angry. I went down the family tree to see who had “the P” and it turned out no one had, and nobody had a clue what psoriasis was.

I was angry, very angry. Why me?! I felt helpless. Later, I realized that is the worst question I could ask because simply there was not (and there won’t be) an answer for it. I am simply one of the 8 million individuals living with “the P.” #Luckyme.

The complicated aspect of psoriasis is finding the right treatment for you. Every case is unique and requires its own approach. It took six months, every single topical treatment you can think of or name, laser, UV treatment, pills and changing dermatologists three times before I got started on a biologic.

My dermatologist never offered this option. She was apprehensive about it. She believed that it was too invasive and high-risk, but I was determined to find a solution. I realized that a huge part of my stress and emotional instability was caused by how I was witnessing my body turning into a scaly fish. It was hard to watch and deal. To this day, I don’t know how I managed.

I researched and after consulting with my primary care doctor, I decided to try biologics. Heck, what was there to lose? My doctor spoke to my dermatologist and she finally agreed to put me on a biologic.

I also cut negative energy and thoughts out of my life. I had to do something to change my mindset. I started to work out more, changed my diet and surrounded myself with people who didn’t judge me but understood me and gave me the emotional support needed when dealing with psoriasis.

Unfortunately for me, by the time I was finally on a biologic, psoriasis had left marks all over my body: discoloration spots that will take many years to clear. I look like a Dominican giraffe, but that is OK. I can only control what I can control. That’s my new mentality. Also, I am trying to raise awareness in the Latino community about psoriasis.

I have psoriasis, but psoriasis doesn’t have me, or who I am.

Edgar Payano, 35, moved to New York City when he was 13 from his native Dominican Republic. He studied corporate communications at Baruch College and currently works as an administrative assistant. His dream is to discover and travel the world one country at a time. Follow his journey on Instagram: @edpayano. Photo by Taurus Studios by Kelvyn Peralta.

Now it's your turn. Volunteer with us and share your journey with psoriatic disease to let others know that they are not alone.