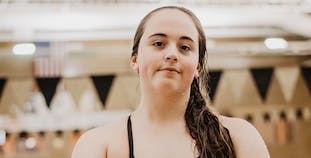 Nothing Stops This Teenager, on Land or in the Water

Lena Oslund is young, confident and living life the way she wants to live it.

Lena Oslund of Lansing, Michigan, has spent most of her life dealing with psoriasis. She was diagnosed at age 6. Psoriasis made her self-conscious. It didn’t help that some kids bullied her.

At a young age, she responded to unkind comments in a mature way. “I handled it by walking away,” she says.

Today, Oslund is heading into her junior year of high school, where she takes AP classes and swims the 500 meters. She’s a lot more confident; she’s older and her psoriasis is “under control” thanks to a combination of a biologic and a systemic.

Her life no longer revolves around psoriasis, she says. And you can tell from her wide-ranging interests, including swimming, bicycling, drawing, karate, photography and reading.

Psoriasis is still a big influence – in a positive way. Oslund participates in Team NPF Walk and Team NPF Cycle with her parents. In 2017, she became an NPF youth ambassador for her region.

“I want [people] to know what psoriasis is and that they can’t catch it and there are good treatments to try,” she wrote on her application.

As a youth ambassador, Oslund spoke at the 2017 Team NPF Walk in Chicago and led Team Lena on the walk. She also attended the 2017 NPF National Volunteer Conference in Chicago.

Psoriasis has had another notable influence on Oslund: Like other patients before her, she wants to go into a medical field. Maybe someday, Lena Oslund will be the person explaining to her patient that there are good treatments to try.

Tap Into a New Community

The NPF One-to-One program is a great place to ask questions and get answers from someone who has been there.