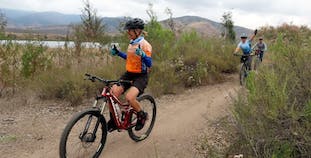 Michelle Racicot used her passion for mountain biking to support those with psoriatic disease.

Michelle Racicot of San Diego, California, does not let her psoriasis stop her from staying active and getting outside as often as she can. “I love the outdoors. I love to hike, snow ski, mountain bike,” she says. “I like to walk. I like the water – beach cruising. I’m real outdoorsy.”

Racicot grew up with brothers and describes her early life as full of sports like softball. She enjoys the freedom of the outdoors and the movement of sports. Although the exact year does not come to mind for her, she says she was about 18 to 20 years old when psoriasis entered her life. Her father had experienced the disease, and she understood that it was genetic.

Racicot now believes the stress she was feeling at that time in her life was a trigger for the onset of the disease. “I was a 20-year-old mess,” she says. “I was under a lot of stress.”

Psoriasis gave her major challenges to overcome, all at a time when she was trying to spread her wings and figure herself out, as most people are doing at that age. “It exploded on me. It was like one of those worst-case scenarios you see – psoriasis all over my body,” Racicot says. “I was living up in San Francisco, working in the garment district, and San Francisco State was having one of those research things where you can go and try products and stuff. And I thought, ‘I’ll just go do it,’” she remembers. “It was one of those infrared light closets. I did that with my whole body, and it cleared it up, thank God.”

Many years later, Racicot still has psoriasis appearing on her lower back, and she says she is mostly challenged by scalp psoriasis these days. Fortunately, the full body flare that introduced her to the disease seems to be a thing of the past. “I’m admittedly less stressed,” she says with a laugh.

Using Sports to Help Others

Racicot has a friend who works for the National Psoriasis Foundation (NPF), which is how she became involved with NPF. She made the occasional donation at first. Then this year, she and her friends who mountain bike regularly on the trails around San Diego began to emerge from the pandemic to ride together again. Racicot decided it was time to pedal with purpose, so she signed on to fundraise at the Team NPF Cycle event in her area in May.

At the event, Racicot rode with beginners, friends, and others she has pedaled with before. It gave her a real feeling of community togetherness. “We all just supported everybody, and it was great,” she says. “It was a lot of fun.”

Racicot also gathered donations for NPF to help fund psoriatic disease research and continue support and education efforts. She says it was a perfect marriage of things she enjoys doing and a cause in which she firmly believes.

Psoriasis Cannot Slow Her Down

Since full body flares seem to be out of the picture, Racicot is able to pursue her athletic ambitions without letting psoriasis get in the way. The psoriasis on her lower back does present challenges because it sometimes becomes inflamed. But “that’s what big Band Aids are for,” she says.

Exercise helps Racicot feel and stay healthy, and she says a healthy diet also helps her manage the disease. “It is always going to be in your system,” she says of psoriasis. “But you can maintain it and keep it down if you treat correctly.”

Racicot has some advice for others who experience psoriasis: “Don’t be ashamed of your body, and you cannot let [psoriasis] bother you, or else you’re going to sit inside, and it’s going to take over the things that you could go out and see and do,” she says. “There are ways to treat it. You have to do your diet well and try to keep stress-less. Go to the doctor and find [treatment] that works for you. Not everything that they prescribe to you will work for you, so if it’s not working, don’t just stop. Go and find something else.”

Find Your Next Adventure

f you would like to raise critical research and support funds for NPF, find a walk, run, cycle, or Pstamp Out event in your area.