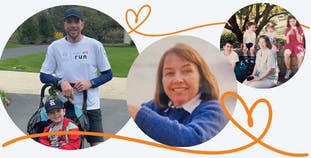 Justin Elliott is getting ready to tackle 26.2 miles in honor of his late mom.

At 36 years old with a full-time job in sales and a 7-year-old child at home, what compels Justin Elliott to run 26.2 miles on the pavement in Chicago?

Justin has run enough in the past to know how rewarding and how difficult it can be. In the case of the marathon, the incredible human feat of covering 26.2 miles in one try, let alone doing so in three or five or even seven hours, is herculean – or in this particular case, Pheidippidean.

And that is only on race day. It is easy for onlookers to gawk at the end result without fully understanding the hundreds of miles covered by the runners in preparation for the race. By the time most marathoners toe the starting line, they have clocked long weekly runs progressing from single digits up to more than 20 miles. “I’ve never done anything this long,” says Justin. “I haven’t done a half-marathon either. I would probably say that over the past 10 years, I have cycled through getting into running and then cycling off [running].”

It does beg the question, will Justin find the consistency needed to handle the training and the race? The answer seems to be a resounding “yes.”

Whatever anyone’s own version of a marathon may be, it takes motivation and inspiration to endure and persist through such incredible pain and adversity. Justin has the motivation: He has signed up for the October 2022 event and logged serious long runs on the streets and city parks near his exurban Chicago home. The inspiration? He has that too, in the form of his mother, Judi, who passed away in February 2021.

Judi lived with plaque psoriasis. Justin doesn’t know the medical severity of her disease, but from his memories, it sounds as though Judi dealt with the challenging symptoms that are common to so many: pain, burning, itching, bleeding, flaking.

“She was itchy all the time. She would leave a lot of flakes,” Justin remembers. “It would keep her from wanting to go anywhere, so she ended up kind of staying home a lot. And she was raising four kids. My dad was traveling a lot. It was a lot on her.”

When Justin realized that running for a cause could help him keep his motivation stoked, he started doing what just about everyone does now: Googling. He found Team NPF, and the idea of raising funds to support people like his mother who live with the disease was a clear and obvious fit for him.

This fall, Justin is running the Bank of America Chicago Marathon for all those impacted by psoriatic disease, and he is doing it in honor of his late mother. “My mom –” starts Justin. “If I had to pick the word that would describe her the best, it would be selfless. I spoke during her funeral, and the message was that I just want to love my family like she loved us. The message was, ‘Love like Judi.’”

Justin wears a small “dad bracelet” to remind him always to love his wife and child the way his mother loved him and his siblings. “I try to embody the way she treated her family with whatever I do,” he says.

With a steady source of inspiration and the motivation of running for a worthy cause helping to fuel his training, Justin seems to have found the consistency needed to pull this off. “It’s just becoming part of my lifestyle – this training,” he says. “I’m very much inspired to do this, and I’m excited about it.”

The 2022 Bank of America Chicago Marathon takes place on Sunday, Oct. 9. At the time of publication, Justin had raised $2,488 for NPF in honor of his mom, Judi.

Run, walk, cycle, or make up your own fundraiser with Team NPF.