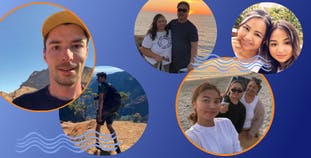 Life with psoriatic arthritis can be unpredictable, but that doesn’t stop Doines Guevara and Paul Kalousek from living their best lives.

Most people do not spontaneously go to the beach on a Wednesday. But when Doines (Dawn-ess) Guevara has a good day, that is exactly what she does.

When you live with psoriatic arthritis (PsA), you have to fully embrace the good days because you never know how long it will be until the pain returns. Life with PsA is a journey that is never a straight path, says Guevara. When the pain is manageable, “this could be a great month or a great week, so make it really good,” she says. “Live it really well – the best life you can – because you’re in control right now. Before the PsA hits again.”

For Paul Kalousek, who also experiences PsA, it is a matter of finding the right motivations. “Being active and positive, being with other people, and having a good sense of humor about the whole situation” helps him get through it, he says. “Because life is beautiful despite it all.”

As inspiring as Guevara’s and Kalousek’s philosophies are, they are only part of a bigger picture that includes struggles, frustrations, worry, and all the bad days in between.

Guevara, who lives in San Diego with her family, is minutes away from some of the top medical facilities in the area. Her PsA is currently well-managed with the help of a biologic that she has been on for a few years, but it took decades to get to this point. Guevara is originally from Guam, one of the small islands that make up Micronesia in the Pacific Ocean, and her doctors there did not know why she was in constant pain. “I was always in pain. It was always like this throbbing pain, and nobody could see it,” she says.

Fortunately, this is no longer the reality for Guevara. “I actually got diagnosed here in San Diego. I was on a business trip,” she explains. “In five minutes, he diagnosed me for sure. He goes, ‘You have psoriatic arthritis.’ That was the first time I heard that.”

With a diagnosis at last, treatment became the next hurdle, particularly because the options for Guevara in Guam were few and far between. She ended up traveling back and forth to Hawaii – a nearly eight-hour flight one way – for treatment during the course of several years.

Eventually, Guevara decided to move her family to California, where her treatment would be much more accessible. Although the delay in diagnosis and treatment led to permanent joint damage, she is happy to report that her recent scans look the same as those from more than a decade ago. The disease progression has been stopped.

While Kalousek is still searching for the right treatment, he has been through a similar wringer of constant pain and seemingly unrelated symptoms. Looking back, he says that some of the first indicators of psoriatic arthritis were the times he had uveitis, a swelling of the eye that led to scarring of his cornea and temporary blindness in one eye. At one point, he was able to receive a biologic for his plaque psoriasis, but after six months it was denied by his insurance company. After the joint pain began, he went through physical therapy, scans, tests, even exploratory surgery with no answers.

Moving from state to state made the situation even more difficult for Kalousek. He had to transfer his medical records, some of which never made it. He waited months for a referral to a rheumatologist. And when he finally got an appointment, he was frustrated and felt rushed.

“We really are blocked into these 40-minute periods of ‘Figure it out,’” says Kalousek. “And if you don’t figure it out in that 40-minute period with the doctor, you’re left with another six months of pretty much just flailing helplessly in an ocean of doubt and not sure where to go next.”

Finally, he saw a rheumatologist who was able to put together all the pieces and give him a diagnosis of psoriatic disease. “That, to me, was like this type of recognition that I think is almost as important as the treatment itself,” says Kalousek.

The biologic treatment provided relief for a year and a half, until he moved to a new state. The next biologic he tried had the side effect of brain fog for him. And the next one gave him gastrointestinal problems.

Still in the middle of his journey finding the right treatment for psoriatic disease, Kalousek says he has struggled with accepting the limitations the disease has imposed on his life. “It is something that I feel defeated by on a lot of days,” he says. “I’m in pain, and I’m tired, and I don’t really want to do anything because I don’t feel like myself. I have to really push through all of that daily to just kind of fake it into being myself again.”

It’s important to accept the disease and how it changes your life, says Guevara, including going through a grieving process for the loss of your former lifestyle.

“It’s not going to be the same. Once you accept that, [you are] stronger or more open to handling it better than previously when you weren’t accepting of what is happening to you or to your body,” she says.

Because it is her hands and feet that are affected, when Guevara is in pain she finds that simple things like walking, tying up her hair, or even just folding a blanket can be impossible tasks. But she has also had to give up larger parts of her life, like the idea of a full career. She now works as a freelance writer. The flexible work gives her the time she needs for those days when her hands will not cooperate or when she has various doctors appointments.

Kalousek is equally grateful for the flexibility that working for himself affords him. When he was first starting his business, however, he worked long, hard hours under constant stress. Because stress is a trigger for psoriatic disease, both Kalousek and Guevara say they have gotten rid of parts of their lives that regularly caused stress. For Kalousek, that includes working past the body’s limits, but he and Guevara both say they are very deliberate in the people with whom they surround themselves. They make sure that friends and family are supportive, and not an additional burden.

“You either sink or you swim, but those are the choices for you to make when you’re living with any disease,” she says.

Much of Kalousek’s support system is online. He connects on community forums for people with psoriatic disease. “It’s just expressing that this moment right now is not great. And somehow, it’s helpful to put it out there,” he says. This has allowed him to continue in his journey toward finding the right treatment.

“You need to continue plotting the course toward better treatment, without resentment toward how difficult it has been,” says Kalousek. He adds that sharing his story is cathartic, and he is eager to do more and to give back to the community that has helped him, such as the National Psoriasis Foundation.

“The idea of your struggle becoming meaningful – for benefiting someone else – is pretty powerful,” he says. Kalousek says he used to envision life as something that he would “go sucker punch in the face.” He was out to conquer. Now that PsA has entered his life, his outlook has relaxed.

“I lost a large degree of self-efficacy, but I’ve built back something different, which is a more stable emotional place,” he says. “I have a lot more gratitude for the things in life that I had overlooked before. I take a lot more stock in relationships and spend a lot more time with [supportive] people.”

What is the Right Treatment for PsA?

We are here to help you navigate your psoriatic arthritis treatment options.