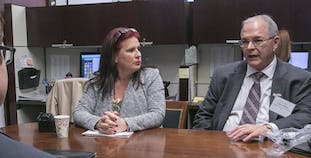 The Worst Kind of Surprise

How to stand up for yourself in the face of surprise medical bills.

John Earley is proactive when it comes to selecting a health plan and choosing where to receive care, but he didn’t get this way overnight. Multiple encounters with surprise medical bills shaped his outlook.

One of Earley’s initial encounters with a surprise medical bill came after a routine procedure from an in-network doctor. Prior to the procedure, he confirmed that the doctor was in-network and therefore assumed that everything else would be covered. A few weeks later, he received a bill from the doctor that matched his expected costs, paid it in full, and moved on. When Earley received a second bill for thousands of additional dollars, he thought there had to be a mistake. After investigating, he learned that the first bill was for the doctor and facility, both considered “in-network,” while the second was only for the anesthesiologist who – unbeknownst to Earley – was out-of-network and therefore not covered by his insurance plan.

Scenarios like this are what make surprise medical bills so surprising. Having done his research, Earley thought he had confirmed that every aspect of his planned procedure was covered, but he still was left with a surprise.

“When I received the huge bill, I called the help line and raised enough of a stink about not being told that the anesthesiologist was out-of-network that they cancelled it,” recalls Earley, “but I was confused how they could so easily cancel such an expensive bill. I started to wonder if they just expect you to pay it without any questions.”

While it is a patient’s responsibility to confirm that the care they are receiving is in-network, the ability to look into it only goes so far. After this first encounter with a surprise medical bill, Earley became more vigilant when selecting facilities and doctors for himself and his loved ones. While caring for his elderly mother, he learned that certain services at the nearby hospitals were not in-network for any insurance plan. “The system is set up for you to fail,” Earley says. “If none of the nearby locations are in-network for the procedure you need, what are you supposed to do?”  Earley’s experience is not unique. Many recent news stories have uncovered scenarios that seem to be set up to stick patients with out-of-network charges because none of the care options are covered by insurance plans.

“Over the years, I have experienced multiple surprise medical bills for myself and my family, despite spending hours researching to make sure everything will be covered,” says Earley.  You might think Earley’s family is just unlucky, but studies have shown that more than half of Americans have received a surprise medical bill. A national study of claims data from 2017 looked at how often in-network, inpatient visits resulted in an out-of-network bill. In Earley’s home state of Texas it was 27 percent of the time.

“I even imparted my knowledge - or maybe fear - about surprise medical bills in my daughter when she went off to college, telling her that the first question she should always ask at the doctor, or if she goes to the ER, is ‘Are you covered by my insurance?’ And I know this sounds a bit neurotic, but from my experience it isn’t,” Earley says. Earley’s daughter did put these lessons to use when she went to the ER for a high fever. “She calls me after and proudly said ‘Dad, the first words out of my mouth were, are you covered by my insurance?’” Earley recalls.

Everyone can learn a bit from Earley’s experience. When asked what advice he’d give others, he says, “Question everything. Don’t pay a bill until you are sure it matches your insurance. Call to double check if something doesn’t seem right.” Earley is right. It is a good idea to do your research and ask if everyone involved is in-network when you are planning a surgery or during an emergency, to the extent possible.

This is great advice for the time being, but when seeking care in an emergency, the first question should not have to be about insurance coverage. Whether it is for planned care or emergency scenarios, patients’ medical bills should not be left to chance. The National Psoriasis Foundation is one of many patient advocacy organizations working to protect you from surprise medical bills, but we need your help. We are asking Congress to protect patients from surprise medical bills.

Protect our community from surprise medical bills by sending a message to congress.

If you are participating in a copay accumulator adjustment program, there are certain issues to be aware of to prevent surprise bills. Request your free resource to learn more about this new insurance trend.