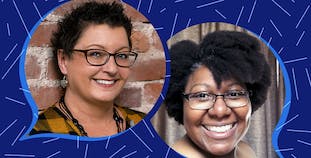 There For Each Other

Sometimes what you need most is someone who has been there before.

“There’s nothing like having someone that you can talk to and get to know, that is there just for you,” says Tami Seretti. That is the whole idea behind the National Psoriasis Foundation (NPF) One to One program. People need to connect. The pandemic has gone a long way in proving that.

The One to One mentor-mentee program, which launched in 2016, is designed to bring together people with questions and concerns about their psoriatic disease with someone who has been through it all before. Some mentees sign up after they’re newly diagnosed with psoriasis. Some seek a mentor when they develop psoriatic arthritis or other comorbidities of psoriasis. Still others might become a One to One mentee when a treatment stops working.

Since the program’s inception, over 600 pairings have taken place between people with psoriatic disease. Those 1200 people comprise a worldwide population. One to One currently reaches 19 countries, and the program is still ready to grow, at only about 72 percent capacity.

So what do a mentor and mentee talk about? And might this program be a good fit for you or someone you know? To find out more, we turn back to Seretti, who has mentored a wide range of people through One to One, and one of her mentees, Tamla Dorsey, to talk with us about the connection they made.

Getting to Know Each Other

At first, the focus is on learning about each other and the ways psoriasis or psoriatic arthritis (PsA) are impacting their lives. “Our conversations in the beginning were really focused on how my body is reacting and ‘Is this normal for psoriatic arthritis? Should I address it?’” says Dorsey, who has Sjogren’s syndrome and turned to One to One when she received a PsA diagnosis.

“The support that Tami has provided me has been so helpful,” Dorsey says. “She has helped me to know what questions to ask my doctor, to highlight specific symptoms that I’ve been feeling, and just an overall reassurance that what I’m going through, she and millions of other people have been through it, and there is the other side that I will get to eventually.”

After getting to know each other, they found that their bond deepened, allowing both Dorsey and Seretti to get even more from the relationship. “Eventually our conversations went to, ‘Well how’s the family doing?’” Dorsey says. As Seretti and Dorsey found, the more they understood the other and the ins and outs of their lives, the more valuable the relationship became.

“Once you build up a bit of a rapport, you get into the more emotional – the feelings,” Seretti says. “The frustration of having your joints not work. The itch and being uncomfortable all the time and not feeling like your skin fits. That’s a lot of it.”

You might assume Dorsey gets most of the benefits from Seretti’s experience and knowledge, but as we all know, psoriatic disease is constantly giving those impacted new obstacles to overcome. Seretti herself acknowledges that she still struggles regularly, and the help of her mentees like Dorsey goes a long way toward bettering her life.

“I became a mentor because I figured, maybe I can make someone else’s road a little easier than mine was,” says Seretti. But she’s quick to point out that this road is more a two-way street. “Talking through [psoriatic disease] with them helps me work out a lot of the frustration I had when I was diagnosed. So helping them actually helps me as well,” Seretti

“I feel like I get at least as much out of it as they do.” Seretti continues, adding that when it comes to her psoriasis and PsA, “I still get anxious about it. I get the blues about it.”

There’s an old saying that goes something like, The smart woman learns from her mistakes, the wise woman learns from the mistakes of others. With One to One, people experiencing the challenges of psoriasis or PsA have the opportunities to avoid the potholes and pitfalls that befell their mentors. “You can learn a lot from others,” Dorsey says. “You can take from their experiences. It also helps you to learn your own body as well.”

Can We Pair You Up?

There is still more room for mentors and mentees in NPF’s One to One program, so whether you’re looking to share your experiences or seeking to glean the wisdom of others who have been through what you are going through, you should explore all that One to One has to offer.

Find the perfect mentor or become one yourself by joining One to One.