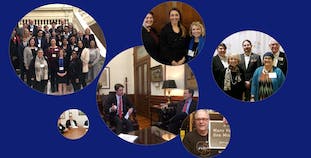 A look at the evolution of working for access to care and treatment for people with psoriatic disease.

George W. Bush was in the Oval Office as the volunteers and staff of NPF descended on Washington, D.C., for the first Capitol Hill Day. It has since become an annual event that has grown tremendously in its scope and impact. Some key NPF advocates like Mike Kammer and Rick Seiden have taken part in more than a decade’s worth of Capitol Hill Days.

“In the earliest days of my advocacy, in 2004, it seemed to me that our primary goal was to raise awareness of psoriatic disease in Congress,” Seiden says.

FEB. 16: The Psoriasis and Psoriatic Arthritis Research, Cure, and Care Act of 2007 is introduced in the U.S. House of Representatives by Rep. David Wu, D-Ore.

This milestone piece of legislation, commonly referred to as PPARCCA (“parka”), had 82 cosponsors. It focused on calling attention to the severity of psoriasis and psoriatic arthritis (PsA) while providing the research funding necessary to find a cure. This disease-specific legislation would be brought before the U.S. House and Senate many times over the next five years.

MAY 23: The Psoriasis and Psoriatic Arthritis Research, Cure, and Care Act of 2007 is introduced in the U.S. Senate by Sen. Robert Menendez, D-N.J., with 15 cosponsors.

FEB. 10: The Psoriasis and Psoriatic Arthritis Research, Cure, and Care Act of 2009 is reintroduced in the U.S. House by Rep. David Wu, this time with 117 cosponsors.

MARCH 11: The Psoriasis and Psoriatic Arthritis Research, Cure, and Care Act of 2009 is reintroduced in the U.S. Senate by Sen. Robert Menendez. This version of the bill has 17 cosponsors.

DECEMBER: Congress passes an omni-bus bill appropriating $1.5 million for psoriasis at the Centers for Disease Control and Prevention (CDC). The House of Representatives Labor, Health and Human Services, Education, and Related Agencies Committee provided funding to support data collection in order to better understand the comorbidities associated with psoriasis, examine the relationship of psoriasis to other public health concerns such as the high rate of smoking and obesity among those with the disease, and gain insight into the long-term impact and treatment of psoriasis and psoriatic arthritis.

“The recent funding is a good start, but we must continue to press for an ongoing commitment from the federal government to support this vital collaborative research,” said Rep. David Wu in a Cision PR Newswire release from Jan. 25, 2010.

MARCH 23: The Affordable Care Act (ACA) is signed into law, establishing new state exchanges for health care and changing the way health care is handled at the federal level.

In early 2010, the CDC received federal appropriations to begin developing a public health agenda addressing the assessment function for psoriasis and psoriatic arthritis.

MAY 26: Back again for one final valiant effort, the Psoriasis and Psoriatic Arthritis Research, Cure, and Care Act of 2011 is reintroduced in the U.S. House by Rep. Jim Gerlach, R-Pa. This time around, the bill has 51 cosponsors.

MAY 26: The Psoriasis and Psoriatic Arthritis Research, Cure, and Care Act of 2011 is reintroduced in the U.S. Senate by Sen. Robert Menendez. It has eight cosponsors.

FEBRUARY: The CDC publishes its Developing and Addressing the Public Health Agenda for Psoriasis and Psoriatic Arthritis report.

JAN. 1: Leah Howard, who at the time served as NPF's vice president of government relations and advocacy, begins a two-year stint as cochair of the National Institute of Arthritis and Musculoskeletal and Skin Diseases coalition, commonly referred to as NIAMS.

JUNE: NPF takes the lead in forming the State Access to Innovative Medicines (SAIM) Coalition. SAIM works at the state level to protect and improve access to care. Patrick Stone, who serves today as NPF’s vice president of government affairs and advocacy, would later serve as chair of the coalition from 2016 to 2018.

OCTOBER: NPF expands advocacy efforts to include a dedicated role for state policy through creation of a state government relations manager position. With passage of the ACA in 2010, NPF moved many advocacy efforts to the statehouses as they played an increasing role in health care availability and access after the creation of state exchanges.

JAN. 1: NPF president and CEO Randy Beranek serves a one-year term as chair of the board of the National Health Council.

Today, NPF has three Advocacy Action Networks in different regions of the United States – East, Central, and West – that meet monthly to discuss advocacy updates and opportunities for members to engage with their elected officials.

Step therapy is a process by which a patient is required to try and fail insurer-selected medications and treatments before moving on to the one their doctor originally pre-scribed. This “fail first” process puts patients in the challenging position of having to try many ineffective treatments before finally being allowed to access the option their doctor thinks will work best.

NPF put years of advocacy and government relations experience to good use and engaged with ICER to represent the interests of people with psoriatic disease. When ICER announced plans to review eight psoriasis therapies, NPF dialogued with ICER and submit-ted comment letters addressing key areas of concern. Ultimately, ICER concluded that all eight of the reviewed systemic treatments were “of good value” and recommended that insurers expand access to these treatments.

Payers, or insurance companies, write the policies that determine what a person with psoriasis or PsA will pay for treatment and provider visits. NPF works on behalf of our community to try to ensure that costs for psoriatic disease treatments and provider visits are covered by payers. It’s one of many examples of NPF’s collaborative spirit working in the best interests of our patient community.

“One of the things we’ve heard for the last several years is that the more information payers can have as they approach their decision-making process, the better it is in order to develop patient-friendly policies and approaches,” said NPF chief operating officer Leah Howard in a National Health Council video interview.

To ensure that the FDA understood the experiences of people with psoriasis, NPF conducted significant outreach to our community to make them aware of the opportunity to tell their stories directly to the FDA.

Because of these efforts, this is the largest and most successful of the PFDD meetings to date. NPF and its community owe a debt of gratitude to those volunteers.

FEB. 10: The District of Columbia passes a copay cap for specialty tier drugs: the Specialty Drug Copayment Limitation Act of 2015. Signed by Mayor Muriel Bowser, the act caps copays at $150 for a 30-day supply of a specialty drug.

APRIL 6: The first federal legislation to protect patients from step therapy is introduced in the U.S. House of Representatives.

Known as the Restoring the Patient’s Voice Act, it was introduced by Rep. Brad Wenstrup, R-Ohio, and Rep. Raul Ruiz, D-Calif. The bill had 88 cosponsors.

MAY 10: Iowa step therapy legislation is signed into law by Gov. Terry Branstad.

MAY 23: Texas step therapy legislation is signed into law by Gov. Greg Abbott.

Before he could receive the treatment originally prescribed by his health care provider, Michael Wood, a teen-ager at the time, was required by his insurance company to go through a step therapy treatment regimen. This process lasted more than a year, during which Wood experienced lupus-like symptoms due to side effects and significant deterioration of his joints due to his PsA.

In March, Michael had appeared before the Texas Senate Committee on Business & Commerce to testify in support of this step therapy reform legislation.

Columbus, Ohio, area advocate Jason Lichten, M.D., who serves on NPF’s board of directors, and his wife, Rachel, participated in a television interview for NBC’s Columbus affiliate. They shared the moving story of their son’s struggles with psoriasis and step therapy.

JULY: NPF engages once again with ICER for a “Psoriasis Condition Update.”

This bill was five years in the making. A Maine-specific coalition was formed in an effort to pass the legislation. NPF partnered with ACS CAN (American Cancer Society Cancer Action Network) to lead the coalition of more than a dozen member organizations, including the Arthritis Foundation and the National Multiple Sclerosis Society.

JULY: NPF expands its advocacy team to include a dedicated grass-roots role.

SEPT. 25: NPF plays a leadership role in the introduction of the first step therapy legislation in the U.S. Senate, known as the Safe Step Act.

Alaska advocate Marc Boas met with Sen. Lisa Murkowski, R-Alaska, at the 2019 NPF Capitol Hill Day. This led to the senator becoming a sponsor of the bill.

South Dakota advocate Gay Murphy had written her state representative, saying, “It has been a long, hard fight to find and be successful with the treatment my doctor and I have agreed on. That is why […] I really believe the doctor and the patient need to be the principal players in finding a treatment. Serious, hard-to-treat psoriasis, or other chronic disease, is exhausting enough with-out an extra step.”

If you want to know what's happening in your state or at the federal level, NPF Advocacy is ready to keep you in-the-know.