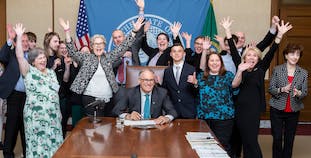 A timeline of step therapy reform and the reintroduction of the Safe Step Act.

In March 2021 the Safe Step Act was reintroduced by the 117th Congress. This legislation amends the Employee Retirement Income Security Act (ERISA) to require a group health plan (or health insurance coverage offered in connection with such a plan) to provide a robust exception process for step therapy protocols.

Step therapy is a tool used by health insurance providers to control spending on patient medications. A 2020 NPF survey found that 70% of people with psoriatic disease who take a biologic have experienced step therapy. While step therapy can be effective in containing the costs of prescription drugs, in some circumstances, it can have a negative impact on patients, including delayed access to the most effective treatment, severe side effects, and potentially irreversible disease progression.

Currently, when a health care provider prescribes a treatment, an insurance company may require the patient to try and fail on different treatments before they can access the one originally prescribed by their health care provider. This protocol is known as “step therapy” or “fail first.” These protocols do not consider the unique circumstances and medical history of the patient, often requiring a patient to use medications that previously failed to address their medical issue or may not best suited to their needs.

The National Psoriasis Foundation (NPF) has been advocating for better health care policies for decades. This work was done often at the federal level, and then with the passage of the Affordable Care Act (ACA) on March 23, 2010 – which included the establishment of state exchanges – NPF expanded advocacy efforts more heavily into state capitols. One key aim of those efforts has been establishing step therapy protections and reform in states across the country. This took place while simultaneously working at the federal level to advocate for the Restoring the Patient’s Voice Act (2017), which today is known as the Safe Step Act.

Several decades of advocating for those with psoriatic disease has taught NPF and its volunteers a great deal about effectively getting legislation passed. What is perhaps most clear is that people like you, who know psoriasis and psoriatic arthritis firsthand are an essential part of the process.

As you take a look at the timeline below, you will notice that NPF and our advocates and coalition partners have been racking up step therapy reform victories. The majority of states now have patient protection and step therapy reform laws. Now it is time to use our momentum and experience to pass the Safe Step Act at the federal level. We need your help to do that.

Will you pledge to take action on Capitol Hill Day April 20-21 to let your legislators know that the Safe Step Act is important to you?

JUNE: NPF takes the lead in forming the State Access to Innovative Medicines (SAIM) Coalition. SAIM works at the state level to protect and improve access to care.

OCTOBER: NPF expands advocacy efforts to include a dedicated role for state policy through creation of a state government relations manager position. With passage of the ACA in 2010, NPF moved many advocacy efforts to the statehouses as they played an increasing role in health care availability and access after the creation of state exchanges.

Today, NPF has three Advocacy Action Networks in different regions of the United States – East, Central, and West – that meet monthly to discuss advocacy updates and opportunities for members to engage with their elected officials.

APRIL 6: The first federal legislation to protect patients from step therapy is introduced in the U.S. House of Representatives.

Known as the Restoring the Patient’s Voice Act, it was introduced by Rep. Brad Wenstrup, R-Ohio, and Rep. Raul Ruiz, D-Calif. The bill had 88 cosponsors.

MAY 10: Iowa step therapy legislation is signed into law by Gov. Terry Branstad.

MAY 23: Texas step therapy legislation is signed into law by Gov. Greg Abbott.

Before he could receive the treatment originally prescribed by his health care provider, Michael Wood, a teen-ager at the time, was required by his insurance company to go through a step therapy treatment regimen. This process lasted more than a year, during which Wood experienced lupus-like symptoms due to side effects and significant deterioration of his joints due to his PsA.

In March, Michael had appeared before the Texas Senate Committee on Business & Commerce to testify in support of this step therapy reform legislation.

Thank you, NPF advocates John Earley and Michael and Jodi Wood, who serves on the NPF board of directors.

Columbus, Ohio, area advocate Jason Lichten, M.D., who serves on NPF’s board of directors, and his wife, Rachel, participated in a television interview for NBC’s Columbus affiliate. They shared the moving story of their son’s struggles with psoriasis and step therapy.

APRIL 10: The Safe Step Act, previously known as the Restoring the Patient Voice Act, is reintroduced to the 116th Congress.

This bill was five years in the making. A Maine-specific coalition was formed in an effort to pass the legislation. NPF partnered with ACS CAN (American Cancer Society Cancer Action Network) to lead the coalition of more than a dozen member organizations, including the Arthritis Foundation and the National Multiple Sclerosis Society.

SEPT. 25: NPF plays a leadership role in the introduction of the first step therapy legislation in the U.S. Senate, known as the Safe Step Act.

Alaska advocate Marc Boas met with Sen. Lisa Murkowski, R-Alaska, at the 2019 NPF Capitol Hill Day. This led to the Senator becoming a sponsor of the bill.

South Dakota advocate Gay Murphy had written her state representative, saying, “It has been a long, hard fight to find and be successful with the treatment my doctor and I have agreed on. That is why […] I really believe the doctor and the patient need to be the principal players in finding a treatment. Serious, hard-to-treat psoriasis, or other chronic disease, is exhausting enough with-out an extra step.”

MARCH: The Safe Step Act is reintroduced by the 117th Congress.

We Need Your Help

This Capitol Hill Day, let your legislator know it is time to pass the Safe Step Act.