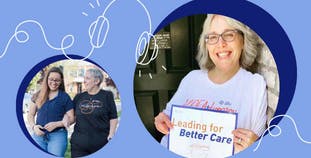 At the National Psoriasis Foundation (NPF) Community Conference in April 2022, attendees went around the room and introduced themselves. When it was Julie Greenwood’s turn, she stood up and described herself as the “goat yoga lady, and if you don’t know what that means, come ask me later.” She was talking about her 2019 Team NPF DIY fundraiser doing goat yoga with her daughter, Nora Yechou, which was later featured in the pages of NPF Advance magazine.

Greenwood developed psoriasis and psoriatic arthritis (PsA) within a few weeks of each other when she was 23. She says she is one of the lucky ones who began treatment quickly, because an observant chiropractor recognized her symptoms of PsA. Greenwood’s daughter developed psoriasis at age 15, but it took the teen much longer to receive a diagnosis, even with Greenwood advocating on her behalf.

During the 30 years that Greenwood has been managing her psoriasis, she has learned to choose where she focuses her energy.

“I treat myself very much like my phone battery. I try to think, ‘Is this something that I’m willing to wear the batteries down for? And if not, how can I get around that?’” she explains. “I try to think of options so that I can still do the things I want to do without wearing the battery completely out before I get started with the activity.”

Greenwood first got involved with NPF in 2016, when she traveled from her home in North Carolina to Washington, D.C., to participate in a Team NPF Walk event. She went on to win an award for the second-highest individual fundraising.

“And that was all it took to get me involved in the NPF. I love to get an award – that is one of those things that will motivate me like crazy,” she says.

After attending several NPF conferences and volunteering as a Psoriasis One to One mentor and a Research Ambassador, Greenwood is now volunteering with NPF by editing the transcripts for the Psound Bytes™ podcast. She admits that she hadn’t listened to the podcast before, but now she is glad for the opportunity to learn from it.

“There’s always something that I take away from it,” she says. “Any time that I have an opportunity to learn from the professionals, it always feels like something that I want to get my hands on.”

Greenwood edited the transcript for the Psound Bytes™ episode on the use of cannabis, including for pain relief, which is something she has been struggling with. While cannabis is not currently available to Greenwood, she says she appreciates that providers are aware of it as an option and that they are supportive of its use even if they cannot recommend it.

The Psound Bytes™ episode about the Mediterranean diet was also educational, Greenwood says, and she even tried the diet for a while and discovered just how delicious it could be.

Greenwood is particularly suited for working on the transcripts, which are generated by a computer and need to be verified, because she has hearing difficulties. Her hearing aids help her, she says, but she cannot always understand what she is hearing. “With the TV, I can turn on the closed caption, and I can see what they’re saying,” she says. “But with podcasts, you don’t have that option unless there’s a transcript.”

For Psound Bytes™ episodes that have been transcribed, the transcript is linked from the episode page on psoriasis.org. “I love that it’s available now,” adds Greenwood.

And for those of you eager for the next installment of goat yoga, Greenwood says she intends to host another fundraising event this winter, so stay tuned.

Volunteering with NPF can take on a variety of forms. Discover the type of volunteering that best suits you and your life.