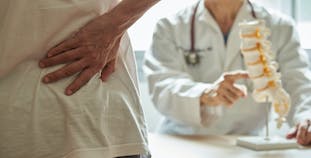 Did you know that PsA sits under the umbrella of diseases known as spondyloarthritis?

While you may know that 1 in 3 people with psoriasis develop psoriatic arthritis (PsA), did you know that PsA is under an umbrella of diseases known as spondyloarthritis (SpA)? The unique features of SpA include inflammation and pain in the spine and pelvic joints and the involvement of the entheses, or where ligaments and tendons join to bones. [1]

Ankylosing spondylitis (AS) is the most common form of axial SpA and is characterized by changes in the bones that are visible by X-ray. In the most severe cases, new bone can form, which fuses parts of the spine together in a permanent rigid position. While other joints can be involved in AS, it is more typical of peripheral SpA that other joints are involved. [3]

In PsA, while inflammation may be present in the spine and pelvis, common locations of enthesitis, or inflammation of the entheses, are the bottoms of the feet, the Achilles' tendons, and above the knee. A common symptom unique to PsA is known as dactylitis, where an entire finger or toe swells and appears as a “sausage digit.” [4] Also associated with PsA is nail psoriasis, which includes pitting of the nails or lifting of the nails from the nail bed. Most people with PsA experience symptoms of psoriasis before the development of PsA, but it is not necessary for diagnosis. [5]

Treatment for these diseases depends on your diagnosis and severity, but can include nonsteroidal anti-inflammatory drugs  which can help manage the pain and stiffness of arthritis, as well as or in addition to biologics and disease-modifying anti-rheumatic drugs. [6] Diet and exercise have also been shown to improve SpA symptoms. Talk with your rheumatologist about your symptoms and your treatment goals.

Learn more about SpA in this podcast with rheumatologist Dr. Hema Srinivasalu.