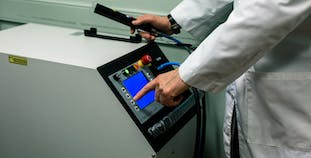 What Your Nails Can Tell Your Doctor About PsA

The risk of psoriatic arthritis may be evident in your fingernails and toenails.

I’ve had a complicated relationship with my nails all my life, but I pushed the symptoms aside with a shrug, thinking that my nails just didn’t grow. A mani/pedi outing with the girls was always just a pedicure for me and then waiting for the others to finish getting manicures or acrylic nails put on. “What’s the point?” I would say to myself. “I don’t have any nails to manicure, and they feel heavy enough as is.”

It wasn’t until my rheumatologist was inspecting my hands that I learned there was a connection between my psoriasis, psoriatic arthritis (PsA) and the condition of my nails.

Apart from my pinky fingernails, every one of my fingernails is affected by nail psoriasis in some way, shape or form. My thumbnails feel heavy and have V-shaped peaks, horizontal ridges, cuticles and hangnails that crack and bleed. My ring, middle and index fingernails are brittle, have splinter hemorrhages (tiny blood spots that appear underneath fingernails and toenails) and break in a way that reminds me of peeling away the layers of a biscuit.

My middle and index fingers and my thumbs are all affected by onycholysis. Have you ever jumped into a freezing cold body of water, and as you surfaced tried to hide the pain with a straight face in front of your friends? That is what washing my hands feels like during a flare-up of onycholysis.

Even writing a story like this one can be a challenge. My nails start to feel heavy, and my joints puff up if I’m constantly typing or texting.

Psoriasis and Your Nails

Ronald Prussick, M.D., a dermatologist practicing in Rockville, Maryland, since 1995, is often the first person to tell patients about the connection between their psoriasis and the condition of their nails.

More than 35 percent of people with psoriasis will develop nail psoriasis. This high percentage, coupled with the fact that nail involvement is often indicative of severe psoriasis, has Prussick checking the nails of every patient who has or is suspected of having psoriasis.

In fact, examination of the nails can sometimes be the only way to diagnose psoriasis if skin lesions are not present or extensive. (Learn what questions to ask and what to tell your doctor with our free Appointment Prep Kit.)

Diagnosing nail psoriasis can be difficult, however, because biopsies of the nail are painful. In addition, many of the symptoms point at other conditions, including anemia, thyroid problems, onychomycosis (fungal infection) or a deficiency in zinc, biotin, calcium, protein or vitamin A.

Toenail psoriasis, for example, is commonly misdiagnosed as a fungal infection, and horizontal ridges (known as Beau’s lines) can be a sign of a zinc deficiency. These ridges are present in a person with nail psoriasis because the structures that support and grow the nail – the nail bed and nail matrix – are weak or have suffered an injury resulting in the abnormality.

Prussick says the key with all types of psoriasis is to be gentle. “If you scratch it, it could get worse because an injury can lead to spreading,” Prussick says, referring to the Koebner phenomenon, in which even small traumas to the skin, including friction and rubbing, can intensify psoriasis.

“Aggressive cleaning under the nail can make onycholysis worse and open the nail up to bacterial and fungal infections,” Prussick adds. That explains why the relief I got from removing the buildup under my nails from onycholysis was over so quickly.

What Your Nails Can Tell You About PsA

When it comes to psoriatic disease, the nails also can be a sign that something even bigger could be brewing.

Evan L. Siegel, M.D., a rheumatologist who shares a practice with Prussick in Rockville, Maryland, believes the main point to take away is that for patients with psoriasis, nail involvement is a risk factor for developing PsA.

“A person who has nail psoriasis has a threefold increased risk for developing PsA, which translates to around 80 percent of people with PsA having nail involvement,” says Siegel.

He also explains that paying attention to what your nails are trying to tell you can mean the difference between minimal and serious, irreversible damage to the joints. “When treating skin psoriasis, the skin that grows back is typically normal, healthy skin,” he says. “But with PsA, once the [joint] damage is done, it is permanent.”

Siegel also echoes Prussick about the Koebner phenomenon: He believes trauma to the nail, surrounding skin and joints may play a role in the development of PsA. Siegel says inflammation below the nail matrix in the distal interphalangeal joint (the first knuckle from the top of the finger) can contribute to nail symptoms. Protecting these areas from injury and trauma (for example, when using the nail as a tool) and from stress (such as straining to open a jar) can help prevent the progression of nail psoriasis and heal the nail, Siegel says.

There are several things you can do that can provide relief from skin and nail psoriasis and psoriatic arthritis (PsA).

Once nail psoriasis is suspected, the sooner you start treatment, the better. Coordination of care between a dermatologist and a rheumatologist can provide a patient with the best course of treatment.

Siegel says several systemic and biologic treatments that work for psoriasis and PsA can also work for nail psoriasis. Talk to your health care team to find out if this approach might be effective for you.

Topical corticosteroids can be applied to the nail matrix with the goal of absorbing into the still-forming nail. Patients also have the option of having corticosteroids injected into the affected nail. However, the pain of the procedure can be a deterrent to this treatment.

Using nail polish and nail polish remover with harsh chemicals such as parabens, formaldehyde and acetone can dry out the nails and cause further brittleness and possibly pain.

Siegel and Prussick agree that being overweight can contribute to a person with psoriasis developing PsA. When belly fat increases, the amount of harmful inflammatory cytokines (proteins) in the body also increases. In addition, there is some speculation that repeated stress on the joints can add to the development of PsA.

Going for a 30-minute walk every day, staying away from high glycemic (sugary) foods and managing stress can help keep psoriasis and PsA symptoms from worsening.

One last thing to remember is that treating nail psoriasis requires patience. Fingernails and toenails grow slowly and take about six months to a year to show improvement.

Get the Facts About Nail Psoriasis

Learn what to watch out for and how you can better manage your nail psoriasis with our free Nail Psoriasis Fact Sheet.