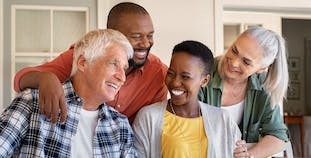 When Affordability Isn’t a Possibility

Navigating Medicare costs when an expensive treatment is your best option.

Every October, millions of Americans begin shopping for a Medicare Part D plan to cover their prescription drug costs. When choosing a plan, most people want to ensure their treatments are covered and affordable. But for those taking expensive treatments through Medicare Part D, affordable is not always an option.

That was the case for Wayne Hauber of Iowa. “The act of retiring made my biologic unaffordable and my costs unpredictable. Medicare Part D plans and biologics do not mix well!” Like many others with psoriatic disease, Wayne learned firsthand how out-of-pocket costs can skyrocket when switching to Medicare from a commercial insurance plan. This is because, unlike many forms of health insurance, Medicare Part D does not have an annual out-of-pocket maximum, leaving patients on the hook for thousands of dollars a year.

Wayne has lived with plaque psoriasis for many years and more recently was diagnosed with psoriatic arthritis after experiencing foot and hand pain that prompted him to see a rheumatologist. To manage his psoriatic disease, Wayne began taking a biologic.

“Back then, I had a great insurance plan through my employer," says Wayne. "The bill for my biologic would show thousands of dollars for each dose, but my insurance covered most of the cost and copay assistance from the manufacturer covered the rest.” Wayne expected his costs in Medicare to be similar because the program is designed for seniors who live on fixed incomes.

Wayne is not wrong. When Congress passed the Medicare Modernization Act in 2003 and the Part D program launched in 2006, many expensive, specialty drugs were not on the market yet. In fact, a 2018 MEDPAC report notes that “specialty-tier drugs now account for over 20 percent of overall gross drug spending in Part D, up from about 6 percent to 7 percent before 2010.” Over time, as more and more patients rely on high cost specialty drugs to manage chronic conditions, the 25 percent coinsurance they pay out-of-pocket through Medicare Part D has become increasingly unmanageable.

To afford high cost specialty drugs, individuals with commercial insurance often rely on patient assistance programs and manufacturer copay cards (also called copay coupons). A 2019 NPF survey found that 54 percent of people with psoriatic disease on commercial insurance use manufacturer assistance to afford their biologics. However, Medicare beneficiaries are prohibited from using manufacturer assistance due to the Anti-Kickback Statute, which prohibits manufacturers from giving anything of value to someone to entice them to purchase a product or service that is reimbursable by a federal health care program. Therefore, Medicare beneficiaries can only use patient assistance programs that are often based on income.

Because Wayne could not qualify for a patient assistance program, he talked to his doctor about the new costs he faced through Medicare Part D. Much to his surprise, his doctor had a plan.  “My doctor recommended changing from my current biologic to a biologic that can be infused. The infusions take 2.5 hours and are considered as a medical procedure, meaning it is covered by Medicare Part B instead. With this change, Medicare pays 80 percent of the costs and my Medigap plan (supplemental insurance) pays the other 20 percent.”

For Wayne, this plan worked. The new infusible treatment was just as effective for managing his psoriatic disease. But this plan was not without sacrifice. “I went from a 30 second injection that could be mailed to my door to a 30-minute drive each way plus time to get the infusion.”

Wayne considers himself lucky but finds it frustrating that he had to change treatments because of the structure of Medicare and not because his doctor thought this new treatment would work better. “I took a risk switching medications. That risk paid off for me, but not everyone will be able to switch to an infusion just to reduce their out-of-pocket costs by using Medicare Part B instead of Part D.”

1.      Medicare Part D needs an out-of-pocket cap and smoothing mechanism: The Medicare Part D program is not working for seniors who rely on high cost treatments to manage a chronic condition. People who are taking a treatment that effectively manages their disease should not be forced to switch to something new just to bill it through Part B. Instead, the Part D program – which is designed for prescription drugs – should have an annual out-of-pocket maximum or “cap” so seniors can predict their annual drug costs. Additionally, this cap should be paired with a smoothing mechanism to allow seniors to spread their costs across the calendar year in affordable monthly installments. The cap and smoothing mechanism for Medicare Part D has bi-partisan support and has been included in drug pricing packages in both the House and Senate. NPF is continuing to advocate for these important policies and hearing from you can help.

Watch this webinar to learn about why people with psoriatic disease experience high out-of-pocket costs when they switch to Medicare Part D, what Congress can do to improve the program, and how you can get involved.