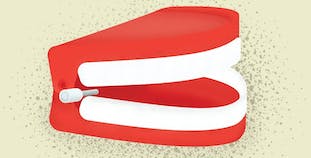 When PsA Invades the Jaw

PsA can affect the TMJ, just like any other joints in your body.

When Candace Primack of Scottsdale, Arizona, started to feel a sharp pain in her left ear in her law class one day, she didn’t know what to do. All she knew was that the slightest movement made the pain that much worse.

After consulting with multiple otolaryngologists (ear, throat and nose doctors) who could not provide any meaningful insight into her condition, she realized that the unanswered questions had also baffled a majority of medical professionals she had been seeing. It wasn’t until she was referred to a dentist who specialized in the temporomandibular joint (TMJ) that the cause of her pain was found – a cause that shocked Primack: psoriatic arthritis (PsA).

TMJs are the joints that connect the jawbone to the skull. PsA can affect the TMJ, just like any other joints in your body. An estimated 35 percent of people with PsA will experience symptoms in their TMJ. Despite those high numbers, there still seems to be quite a bit of confusion when it comes to treating PsA in the jaw.

Finding Out Too Late

Primack experienced this confusion firsthand, as it took several years of seeing specialist after specialist in her 30s before her PsA was diagnosed in 1997. “The biggest problem was that it took a long time for someone to diagnose me with PsA,” says Primack. “As a patient, it is frustrating to live with pain and not be able to find a doctor who can help you.”

By the time the cause of her pain had been determined, in some ways it was already too late. Primack gave up her legal career because of the pain medication she took for her then-undiagnosed PsA. “I did not feel comfortable practicing law because of the pills I needed,” Primack says. “Sometimes I forgot words because of my medication and my memory was very bad.”

Further, her left TMJ cartilage found between the two joints had completely deteriorated, causing ankylosis, which is the fusion of two joints into one solid joint. This made everyday activities like talking and eating difficult. “My mouth will only open a limited amount,” says Primack. “So I can’t eat big things, like hamburgers.”

To counter the damage, Primack underwent a procedure in 2003 that grafted skin from her abdomen to her damaged TMJ to add new cartilage and to separate the joints. However, shortly after the swelling from the procedure receded, Primack immediately knew that her problem was not solved as the familiar pain returned to her jaw.

She was then told that the only choice left was a complete TMJ replacement. However, due to her young age in 2003, she was told that two replacements would be needed over her lifetime. Primack opted to wait as long as possible to undergo the procedure, so that she would need only one replacement.

Fast forward to today. With her left TMJ completely fused, and her right TMJ deteriorating quickly, Primack is ready for that replacement. However, the only specialist she found in the Scottsdale area does not take insurance, and her out-of-pocket cost would be $60,000. She is looking for alternatives and battling with her insurance company to see if it will cover any of the cost.

Take Hold of the Situation

Primack’s PsA journey, which has led her to jaw replacement surgery, is an extreme case, according to Ana-Maria Orbai, M.D., an assistant professor of rheumatology at Johns Hopkins University in Baltimore, Maryland, and an NPF medical board member. She says that for most people, treating PsA in the jaw should follow the same playbook for treating PsA in any other part of the body.

“If people have symptoms of inflammation in the jaw caused by psoriatic arthritis, treatment can be established and adjusted to avoid long-term damage,” says Orbai.

The range of treatment options, including biologics and oral medications like disease-modifying antirheumatic drugs, should work for preventing or slowing the degradation of the TMJ as it does in any of the other joints, says Orbai.

The TMJ is connected to the strongest muscle in the body, the masseter muscle – therefore it is a very hard-working joint and at risk for damage. She also recommends some common-sense lifestyle changes that people can make. “You can take an anti-inflammatory and stop chewing hard foods like almonds to decrease pressure on the jaw.”

Checking in with the dentist to rule out other causes of TMJ pain is critical as well. When in doubt, imaging techniques such as radiographs and MRI can differentiate between damage and inflammation. A custom mouthpiece to wear at night may also help individuals who are experiencing jaw misalignment or teeth-grinding.

As for whom to talk to in the medical community, there really isn’t a wrong answer. But keeping quiet about early signs, even if that sign is a minor earache or occasional clicking of the jaw, could make your treatment regimen that much more difficult.

“If someone with psoriatic arthritis, or even psoriasis, experiences symptoms of pain and jaw-locking, it’s worth bringing it up to both your dentist and rheumatologist,” says Orbai. “These are usually the first signs that the TMJ might be affected, and early detection is very important to prevent long-term damage.”

It’s up to you to reach out to your rheumatologist, dentist, general practitioner or other health care provider if you think there’s a problem. While Primack’s story of struggling to find a doctor who could correctly diagnose her PsA is an exception – and while more than a third of PsA patients will experience some symptoms in their TMJ – medical professionals could do a better job of identifying issues in the jaw, says Orbai.

“In clinical practice, rheumatologists aren’t necessarily used to looking at the TMJ. They are part of the 66/68 joint count, which was just recently recommended as a best practice measure for clinical trials, longitudinal studies and even in clinical practice,” Orbai says. “But most people in practice will just look at patients’ hands. Because practitioners aren’t doing the full joint count, they may miss the TMJ.”

(The 66/68 joint count measures 66 joints for swelling and 68 for tenderness and pain.)

It’s a matter of rheumatologists getting in the habit of checking the full range of joints, and patients bringing up the range of their symptoms, which Orbai says is happening more frequently today than it was when Primack first began experiencing joint pain.