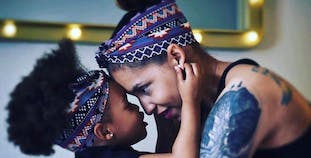 Tattoos on skin affected by psoriasis come with risks, but that isn’t stopping people from expressing themselves.

For thousands of years, people have used tattoos to express rites of passage, devotions of love, spiritual and religious symbolism – an outward show of their values and beliefs. People who have psoriasis showing on their skin are no different.

Hannah Williams has accumulated 14 tattoos in just six years. Some tattoos have special meaning, like a semicolon tattoo that represents the struggle of mental illness she and people close to her have faced. For other tattoos, she just liked the design, she says.

“For example, I have Peter Pan, The Lost Boys and Beetlejuice because they’re some of my favorite films, and then there are tattoos like [my] semicolon tattoo,” says Williams.

The Koebner phenomenon, in which psoriasis flares can be triggered by damage or trauma to the skin, is a very real consideration for those with psoriasis and tattoos. For Williams, nothing happened after her first tattoo. “My skin was fine after getting the tattoo,” she says. “But over the last four years, as my skin got better and worse, I have had [psoriasis] patches pop up over my tattoos.”

Williams says when the lesions heal, the tattoo is unaffected.

“At the point when I got my first tattoo, my skin was at a good place, and I didn’t have any reservations about getting it done,” says Williams.

Rue Monroe, who works as a librarian, was diagnosed with psoriasis at age 2 and has a total of seven tattoos. She got her first tattoo at age 24 – a small crescent moon on her inner left wrist – to pay homage to the Pagan religion she follows.

When Monroe got her third tattoo at age 26, an hourglass on her right calf, a patch of psoriasis soon developed. “The patch of psoriasis was diamond shaped and just touched the border of my tattoo,” she says. “I’m happy it didn’t spread and take over my tattoo, at least!”

Air Force veteran Shannon Hall had never heard of the Koebner phenomenon and the effects prior to getting tattooed.

“I didn’t know that damage or an injury to the skin could cause a flare-up, and that wouldn’t have changed anything anyway. I love my tattoos, and after this current flare-up is gone, I will be getting more,” says Hall.

“Psoriasis is not curable, so I’m not going to let it stop me from living,” she adds.

Hall got her first tattoo at age 19 – a cherry blossom on her lower abdomen. Luckily, she has never had any reaction to getting tattoos. She now has a sleeve (full length arm tattoo) and 5 other tattoos, all of which hold deep symbolism for her. For instance, on her foot is an infinity symbol, which represents her refusal to “sink because of the obstacles,” Hall says. “It’s a reminder of what I went through and that I’ll always make it.”

The Koebner Phenomenon and Other Concerns

In the late 1870s, Heinrich Koebner first detailed the phenomenon that would come to bear his name. He was describing the appearance of psoriasis plaques on skin that had experienced trauma and was previously unaffected by psoriasis. [1] You may also hear this referred to as isomorphic psoriasis. It simply means that the plaques resulting from trauma are similar in presentation to the plaques on skin that was previously affected. The Koebner phenomenon impacts approximately 25 percent of people with psoriasis after traumatic injuries. [2]

Beautiful and meaningful as tattoos can be, it is undeniable that they require trauma to the skin. During the tattooing process, a specialized type of needle with tattoo ink goes rapidly in and out of the top layers of skin to outline, shade and color the skin. If someone with psoriasis gets a tattoo, there is a significant chance of inviting the psoriasis plaques to the tattooed area. You might go into the tattoo parlor with scalp psoriasis, for example, and after getting a sleeve, you could start to see psoriasis plaques on the arm.

If a tattoo is important enough to you to proceed despite the risks associated with the Koebner phenomenon, there are a few other things to consider before hopping into the artist’s chair.

“A tattoo done in nonhygienic conditions can [lead to] an infection,” says Nicolas Kluger, M.D., Ph.D., senior dermatologist in the Department of Dermatology of the Helsinki University Hospital in Finland. “Of course, the main complication is regret.”

Risks and regrets noted, Dr. Kluger says that tattoos can have a positive effect on self-image. “We saw in some studies that for people who have tattoos and psoriasis or skin disease, the tattoo can have a positive impact on body image,” he says. According to a study, he adds, “people with tattoos found themselves more beautiful or more attractive.”

Working With the Artist

Both Williams and Monroe talked to their tattoo artists to find out about the risks and even the laws concerning tattooing people with psoriasis.

Tattoo artists in Oregon, Wisconsin and Louisiana, for example, aren’t permitted to work on any area of the skin where there are lesions. Louisiana even has a clause that specifically mentions psoriasis. South Carolina also prohibits tattooing on skin with any type of irregularity, such as a rash, sunburn, lesion or pimple.

“If I go to a new artist, I make sure they know exactly what is going on, and I doublecheck they’re happy to tattoo me,” says Williams. “I have certain tattoo artists that I go to and that are well aware of my skin condition and are amazing.”

Monroe says she also consults with her tattoo artist before each session and ensures that he or she is OK with tattooing her.

Rhode Island-based tattoo artist Nicole Coogan has found that if clients have a good understanding of their experiences with psoriasis as well as the condition of their skin at the time of the appointment, it helps in making the best decisions for safely executing tattoo placement and artwork. She says she has had a lot of success with her clients who have psoriasis.

“Trauma to the skin may cause plaques to build on the area, so tattooing is definitely a higher risk [of the Koebner phenomenon] in an individual with psoriasis,” Coogan says. “But depending on the person, it is not completely impossible.”

Coogan and the artists at her shop provide aftercare advice to all their clients. They go into further details about different types of aftercare ointments, lotions or techniques, depending on the unique skin type of each person. The shop also offers clients free touch-ups within the first year of getting a tattoo.

Every tattoo shop has different aftercare instructions, but typically they include keeping the tattoo clean (clean clothes and sheets), washing with antibacterial soap for the first few days, and keeping the tattoo moist with fragrance-free lotion. Also recommended is hydrating as much as possible beforehand and hydrating the skin where the tattoo will go.

If tattoo art is a way you wish to express yourself, you can discuss your ideas with a knowledgeable artist and discuss your plans with your provider.

Subscribe to Advance Weekly to get the latest on psoriatic disease right to your inbox.