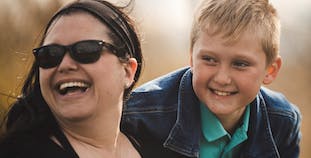 Zack Harrison is young, but he is already a vocal member of our community.

Zack Harrison of Center Valley, Pennsylvania, approached his terrible twos with something most toddlers don’t have: a mysterious disturbance on his skin.

“Zack’s pediatrician kept testing. They kept culturing everything, and everything kept coming back negative. So they said, ‘You need dermatology,’” recalls his mother, Eddee (pronounced “Eddie”) Harrison.

Zack was diagnosed at age 2 with psoriasis. The dermatologist recommended a systemic, but the family wasn’t immediately ready. “He was so young. We tried his diet first. We eliminated gluten, we eliminated dairy, we eliminated gluten and dairy, and nothing helped,” Eddee says.Zack went on the systemic at age 2 and stayed on it until he was 6, when he was able to switch to a biologic.

“He was great on that, but then in 2018 his psoriasis broke through,” Eddee says. “What was going on?” Their dermatologist suggested a second biologic. “I did not want to switch,” she says. “This drug wasn’t approved for under 12 yet. Also, I said to the doctor, ‘If we go to this, and it doesn’t work, then we have nowhere else to go.’” But Zack was approximately 80 percent covered, so the family chose to go with the second biologic.

And then things took an unexpected turn.

Zack’s doctors had been testing him for that scourge of childhood, streptococcal pharyngitis, better known as strep throat. He never came up positive – until early in 2018, while his psoriasis was flaring. Zack spent 50 days on antibiotics, and by the time they got rid of the strep throat, he had to have his tonsils removed. That was in July 2018. Surprisingly, during this tumultuous period, his psoriasis cleared. Zack’s doctor had taken him off his biologic just before the tonsillectomy, and so far, he hasn’t been back on it.

“His scalp is the only place where he has a little bit of psoriasis,” Eddee says. “Not that he can’t flare again, but for right now, it’s been amazing. If it works, it works!”

Power to the Patient

When Zack had his tough stretch in early 2018, “It was the first time that he realized that people were looking at him and saying things to him,” Eddee says. “People were not being so nice.”

Zack’s first flare, back when he was diagnosed, was so bad that when the family was visiting Disney World, one of the Disney characters wouldn’t take a picture with him. “Zack didn’t understand. He was not even 3 years old. He didn’t get it. But last year, when he was 7, he got it,” Eddee says.

Eddee says that years ago during one of Zack’s flares, “It was the first time when I didn’t know what to do.” She contacted the National Psoriasis Foundation (NPF). That’s when she learned about Team NPF.

“We’ve done a few things with NPF,” she says. “The first thing we did was the Team NPF Walk in the Philly zoo. We got capes for Zack and all his friends. He was young, maybe 3 or 4. And then last year I helped to run the Pstamp Out. And I spoke and Zack spoke. He did great. This was back when people would say things or stare, even in school with kids that didn’t know. That’s when I really started to try to empower him.”

Eddee is working with Team NPF Walk on our Lehigh Valley event this fall, and with NPF's help, will put together a presentation and take it to local schools – a presentation that will include Zack, whom Eddee calls her "psuperhero son," for teaching others about psoriasis.”

Listen to Zack and Eddee on Psound Bytes™

Diagnosed at age 2, hear Zack and his mother Eddee Harrison's moving story about where it all started, how they live with psoriasis and what they do to help find a cure for psoriatic disease.