Role of IL-36 in Pustular Psoriasis and Its Female Skewing 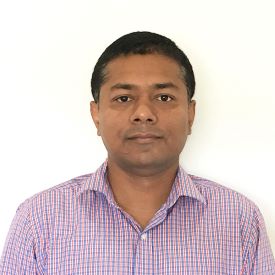 
This grant was funded by the Dr. M. Alan Menter Translational Research Grant.

Mrinal Sarkar, Ph.D. joined the University of Michigan Department of Dermatology research faculty as Research Investigator in 2016. He is a member of the U-M Psoriasis Immunology and Immunogenetics Research Program.

Dr. Sarkar is pursuing research focused on the functional characterization of genetic variants in psoriasis and autoimmune skin diseases, working in collaboration with Dr. Johann Gudjonsson. Dr. Sarkar received his Ph.D. in Biochemistry from the Jadavpur University, Kolkata, India in 2010. He completed post-doctoral fellowship training in the U-M Department of Human Genetics and was recruited to the U-M Department of Dermatology's Psoriasis Immunology and Immunogenetics Research Program in 2014.

The NPF has awarded over $30 million in research funding in recent years, with immeasurable impact on our community.

We Need Your Help

With your gift we can fund even more research to get better treatment and diagnostic options and someday, a cure.

Discover our other active research projects.